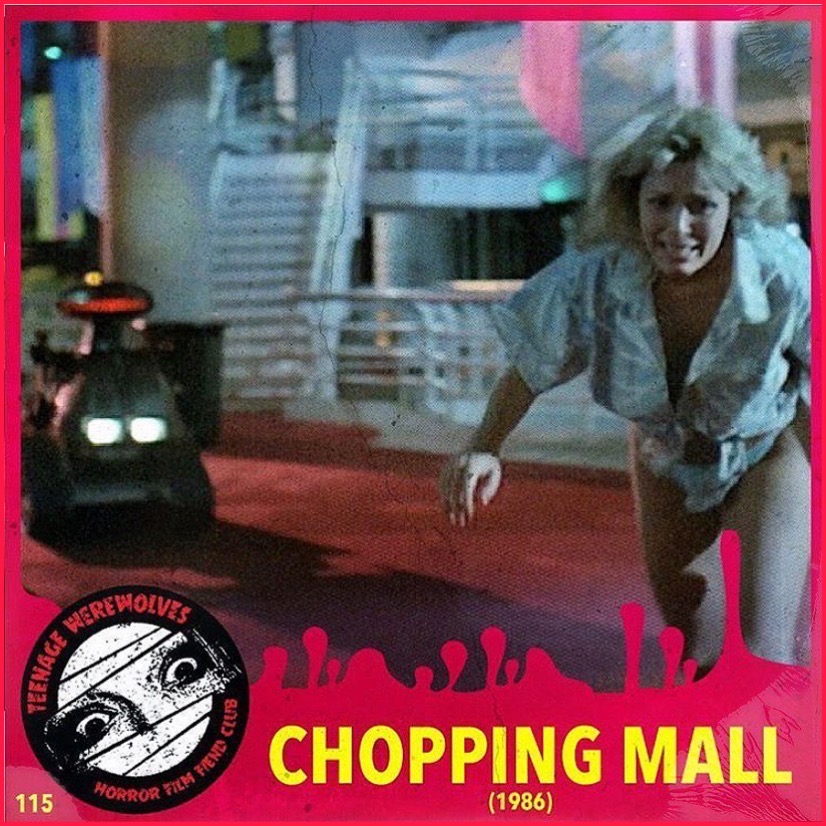 The intensely troubled times of the 2020 Coronavirus pandemic has us all looking at the concept of shopping quite differently — the very act itself seems almost a distant memory, and what recent experiences we do have are peppered with existential questions regarding gluttony, scarcity, vulnerability, and exposure…proving that it’s becoming increasingly harder for many of us to “Have a nice day.”

On March 21, 1986, however, Jim Wynorski helped to sell us a completely different vision of commerce, helping us to slash prices…and burn them, and shoot lasers at them, and put tarantulas on them, and then eventually blow the heads right off those aforementioned prices. Set, after hours, in the familiar interior landscape of the Sherman Oaks Galleria mall (of COMMANDO and FAST TIMES AT RIDGEMONT HIGH fame) and boasting the talents of Kelli Maroney, Barbara Crampton, Mary Woronov, Paul Bartel, Dick Miller, and the charmingly efficacious Killbots, CHOPPING MALL also impresses with a memorably infectious score, laden with the latest in synthesizer technologies (featuring a Yamaha DX7, Prophet 2000, 360 Systems Midi Bass, and a LinnDrum sequencer), intended to highlight the dangers of the sentient mechanical nightmares contained therein. It works, and Chuck Cirino’s score remains a highly celebrated aspect of the film, which Waxwork Records thankfully gave the deluxe vinyl treatment in 2014.

Originally titled KILLBOTS, the rebranding of the film garnered more attention and more money (though perhaps also simultaneously misleading some viewers with that beautifully decadent box art depicting a bevy of butchered human remains spilling out of a Park Plaza Mall shopping bag, held loft by a horrifying bio-mech hand), and when Vestron unleashed CHOPPING MALL into the video-store aisles, the robots plowed their way into B-horror film history; happily, they’ve been politely hoping we have a nice day ever since. A purported remake — against Wynorski’s wishes, no less — has been making horror headlines over the last few years, most recently claiming that the film will be robot-free…which, admittedly, made our heads explode a bit. Yes, and Leslie’s, too. The “phantom of the mall but with the fresh angle of robots a la 1954’s GOG” story that resulted in Wynorski’s film (made in collaboration with the legendary production talents of Roger and Julie Corman, and released through 80’s darlings, Vestron) was purportedly birthed in 24 hours by Wynorski and friend, Steve Mitchell. Despite no script, Vestron immediately green-lit the project which filmed for approximately 20 days and was ever under the pressures of the Roger Corman “film school” and production aesthetic. Subsequently, CHOPPING MALL is an excellent visual text for introducing our students to a very particular type of 1980s schlock, where inventive ideas, innovative approaches on the smallest of budgets (including a no-nonsense approach to the bottom line), delightful practical effects, humor, and a plucky, young ensemble cast all converge to beget not exactly CITIZEN KANE, persay, but a minor artifact of cinema nonetheless…an influential composition worth revisiting and certainly existing as cache of inordinate of the nostalgia effortlessly anchored to time and place.

CHOPPING MALL is also a friendly reminder to avoid the needless violence and murder of your local shopping mall — keep our community strong by supporting small businesses and artists. Thank you, have a nice day.