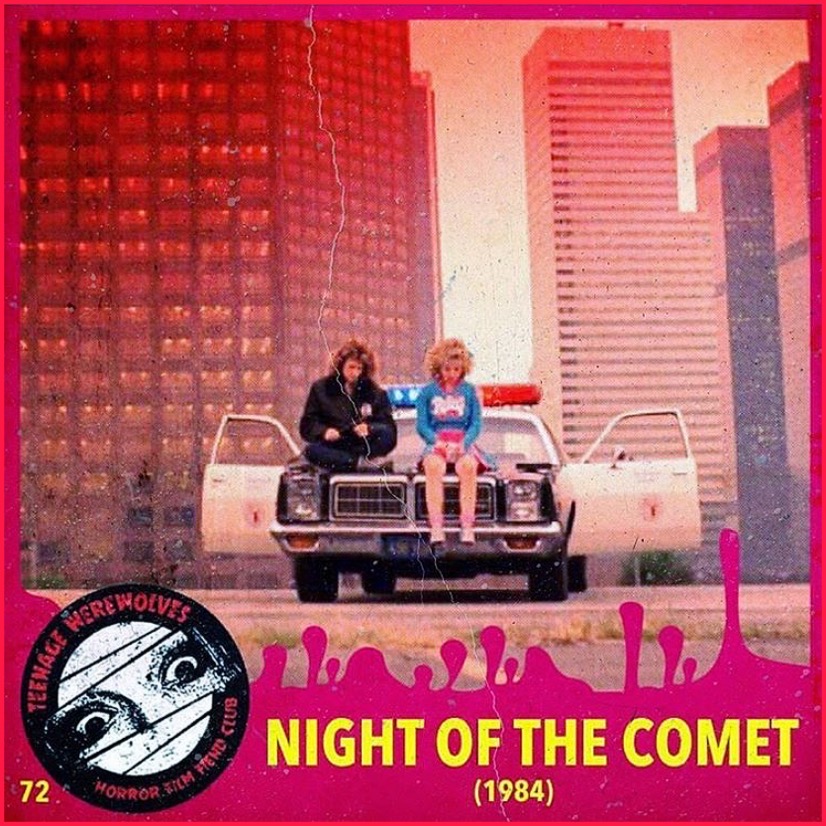 “You may as well face the facts, Samantha: the whole burden of civilization has fallen upon us…”

On this auspicious day in 1984, Thomas Eberhardt’s criminally under-seen, mixed-genre cult classic, NIGHT OF THE COMET was released. Boasting the effects of David B. Miller and an epic synth-and-pop soundtrack, COMET boldly features strong female protagonists who confidently carry the film, and who are humanized rather than made the butt of stereotypical punchlines so common to films of the era — an element that makes the film not only noteworthy, but also an exercise in potent gender dynamics amid the post-apocalyptic material.

Tastefully borrowing the best bits and pieces of everything from VALLEY GIRL to THE LAST MAN ON EARTH (or, if you prefer, 1971’s OMEGA MAN) — and, of course, the zombie filmography of George A. Romero — Eberhardt’s film takes a lighthearted approach to the return of an extinction event not experienced since the time of the dinosaurs. And yet, do not be fooled by the seeming simplicity of this “John Hughes-Meets-Roger Corman” exploitation extravaganza: its core-conscience of humanist concerns vs. the cold and calculating clutches of the scientific-military complex explores some existential deep truths, as all potent science-fiction is wont to do. Filmed on a meager budget of only $700,000, NIGHT OF THE COMET — in comparison — looks like a million dollars, with its low-budget pedigree rarely betraying the film’s potency. Matte-shots, simple but effective character make-ups from Miller, clever conceits (such as the radio station recordings and the hauntingly silent city-streets), and a direct focus placed upon characterization, all are techniques which brilliantly converge to create an overtly effective and convincing “end of days,” where Reggie’s earnest lamentations of “Where are the kids? It’s Saturday morning. Where are the goddamn kids?” amidst a pile of clothing and shifting swirls of red dust truly evoke a palpable spookiness and sense of loss.

Ever proselytizing the merits of Eberhardt’s film, the TWHFFC included COMET as a part of last year’s SCREAM-O-SCOPE CINEMA! 12-HOUR HORROR INVASION at the Historic Howell Theater, and it was with great pride that we introduced the film to an entirely new audience (while also bringing some additional nostalgic joy to the die-hands in the audience). We’re not sure about the general populace, but the TWHFFC has always considered COMET a part of our holiday stack — it’s temporal backdrop and “end of humanity” implications feel right at home next to IT’S A WONDERFUL LIFE. In addition to Yuletide cheer, Eberhardt’s vision of Christmas Eve brings a cataclysmic comet to earth, forcing Reggie and Samantha (played with aplomb by Catherine Mary Stewart and Kelli Maroney, respectively) to defend the the streets from marauding zombies; rectify arcade game scores; engage in reckless bout of shopping-spree dress-up in the local mall; waste bullets on parked cars; and, ultimately, battle scientists with questionable ethics. In the hands of our unflappable protagonists—with the addition of Robert Beltran’s Hector–it is a very Merry Christmas, indeed. In fact, those haunting, empty LA streets on-screen are not the result of overt powers that be or legal filming permits purchased on an ample budget, but rather what happens when one combines a few location cops, the elevation of Grand Avenue (masking any impending pedestrian problems within the frame), what Eberhardt has referred to as a pre-recorded “empty city” soundscape, and the actual Christmas morning traffic of downtown Los Angeles, circa 1983.

It may come as no surprise that COMET is set for a remake, with SOUTHBOUND, XX, and BODY AT BRIGHTON ROCK-director, Roxanne Benjamin, having submitted a script but, as of this time last year, is not necessarily attached to direct. Eberhardt’s film is a property that’s understandably ripe to get a darker reimagining and In the meantime, we’re loading up on quarters and hitting the arcade, as this “DMK” creep needs seriously needs to be dethroned. So if you’ve never taken the ride, grasped the comet’s tail, or found yourself in the Bullocks Wiltshire, spending the holiday with Hector Claus, consider this official Fiend homework because it’s a goddamned blast. The atomic, “You’re a pile of red ashes, now” kind.

Digested as a feel-good dystopian text that is, arguably for the whole family, NIGHT OF THE COMET may emerge as your new movie for those holidays of cooler climes, where, as you watch, you can secretly (although logically) wish your extended family would all find themselves vaporized in the streets like Doris and Chuck. Mark your calendars, Fiends: It’s November 16, 1984, and “The Whole World is Celebratin’!”