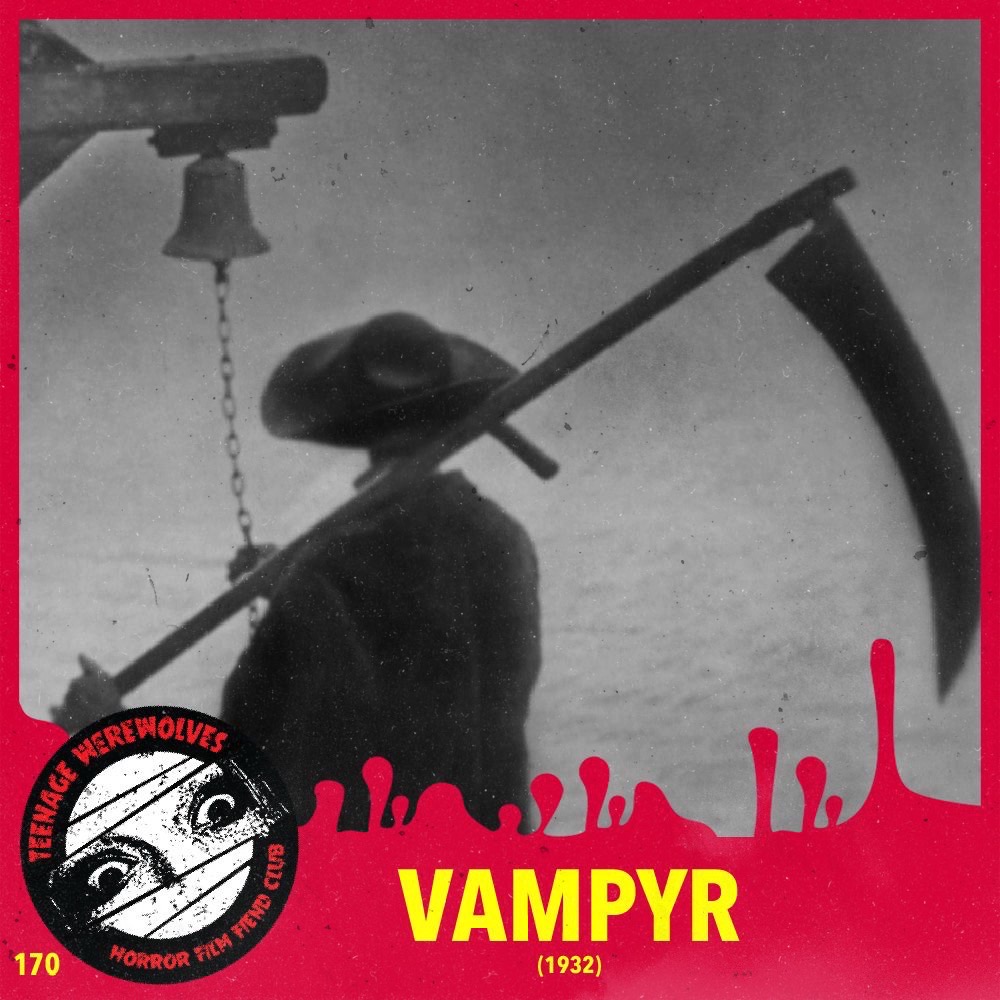 “What was going on? What terrifying secret was unfolding?”

As the title card informs us, Dreyer’s meditative masterpiece is the strange and esoteric tale of Allan Gray, who “immersed himself in the study of devil worship and vampires. Preoccupied with superstitions of centuries past, he became a dreamer for whom the line between the real and the supernatural became blurred. His aimless wanderings led him late one evening to a secluded inn by the river,” and it is a tale recognized as only the third major film in the history of cinema to feature the cavorting creature of the night “whose terrible deeds in life,” the film tells us, “deny them repose in the grave.”

According to critic and author of Nightmare Movies, Kim Newman, although Dreyer’s film is purportedly based on the Sheridan Le Fanu collection, In a Glass Darkly (and of that, seemingly only the “Carmilla” tale is a strong narrative progenitor), VAMPYR “seems more like a screen original that tries to feel like an oft-told tale, with silent movie style prose captions between scenes and characters who drift through the plot as if trapped in a recurring nightmare,” continuing that, unlike NOSFERATU or Browning’s DRACULA before it, Dreyer’s 1932 film is something different altogether, arguing that it is a “dreamy alternative to the standard notions of horror. The sights that our haunted — and grimly drawn, despite his purportedly young age — protagonist, Allan (or David in some prints) Gray alights upon are often mesmerizingly melancholic…and poetically disquieting. Whether a visual study of the angle of hallway doorjambs, a shadow of a seeming non-entity gamboling along the river-bank, the unsettling sight of the disfigured man within his hotel room, or even the simple shifting, in camera, from the concrete substance of physical structures to an ethereal cavalcade of silhouettes, the early scenes of VAMPYR (along with the onscreen prose) are thoroughly inscrutable…almost sphinxlike in their composition and transmission; Allan Gray is thrust into a world of the inexplicably mysterious, and the audience is forced along with him…almost as if we are coerced, by Dreyer, into being some sort of existential co-pilot to Gray’s journey of the soul. The “young man placed in peril” so common to the vampire myth — at least where the influence of Bram Stoker is concerned — is, of course, employed here, and yet Gray seems more a transcendental tourist, floating through the frames, images, and tableaux’s like some archetypal spectator, passing through the underworld whilst he has other destinations adrift within his destiny.

Dreyer’s film is, admittedly, a non-commercial affair, thought by many to be painstakingly slow, and devoid of shocks or flourishes of the grand guignol…and yet it still retains an ability to transfix the viewer, especially those easily lured in by arthouse cinema. Like Gray, we submit to the scenery and the phantasmagorias dancing amidst the dusk light, and we are lured into a dream-like world where we seemingly encounter — and experience — the fever-dream of death. As a viewer, have we somehow crossed over, not unlike the man waiting at the shore in one of the early sequences, waiting upon the riverbank, scythe in hand? Are we in fact, experiencing the transition from life to something else entire, an idea underscored by the dreams where Gray stumbles upon his own body in a coffin, where subjective camera shots afford us an intimate portrait of one’s final vistas? There is a hazy, gauzy, and almost shroud-like quality to so many of the shots that interpreting Dreyer’s film as a metaphysical exercises in the cerebral ambiguity of mortality where demons such as the vampire, tortuously reside is more than acceptable. But is is something more? Is it far more autobiographical, as some theorists have argued, or is it merely a meditation on the transitory nature of the soul, shifting and bending within the shadows, not unlike how characterizations and roles within Dreyer’s film seem to wax and wane like fluid pluralisms. Regardless of one’s interpretation — and it is certainly a film that implores for discerning comprehension — VAMPYRE remains a hushed triumph. A triumph where one of its more commanding components is, like Le Fanu’s “Carmilla” story, it is the female vampire that holds a quiet dominion over all.

Though the female vampire as enchantress and succubus is now of overt inclusion within film and fiction, Sheridan Le Fanu’s 1872 story of vampires with its thinly veiled lesbian subtext was something of a modern marvel. Like in the Hammer adaptation of the same material, THE VAMPIRE LOVERS, Le Fanu’s vampire is a comely young seductress, introduced with a complexion both “rich and brilliant; her features were small and beautifully formed; her eyes large, dark, lustrous; her hair quite wonderful…” and whose “sense of attraction immensely prevailed” (Le Fanu 124-6). Dreyer on the other hand, delivers us something more akin to NOSFERATU’s Graf Orlock, as Marguerite Chopin (Henriette Gérard) is a wizened old crone, haunting the hills with her shock of white hair, shawl, and walking stick. Our notions of the succubus are challenged here — Marguerite commands her minions much like a myriad of other, core vampire texts, but her sensuality is diminished to the point of evaporation, perhaps playing on the primordial sense of evil she is meant to represent, and somehow, even evoking a strange sense of pity.

Dreyer conjures a languid tone poem of horror, as anchored in the ether as it is inventive choices and techniques for 1932. It is certainly a far cry from Browning’s DRACULA released the year before, where stilted dialogue and wooden, stagey action gives way to all that has been discussed (it is more akin, perhaps, to those atmospheric scenes suffused with a bit of surreality within Browning’s later MARK OF THE VAMPIRE, produced for MGM in 1935)…what director and auteur Guillermo del Toro praises as “a most haunting, sublime Memento Mori” where cinematographer Rudolph Mate’s “camera becomes a character in the film. It’s more than a witness, it’s an active participant in the narrative, and therefore deeply cinematic.” Maté makes impressive use of natural light, as the entire film is shot on location, and this only adds to that ethereal quality, where light and shadow gives way to what Dreyer called “a film different from all other films,” which is exactly what we set out to make.

And though it is assuredly not for everyone, students of the genre would do well to seek it out — it is a cinematic land entire, made up of phantoms and unnerving subjectivity that, more likely than not, may take root within the fabric of your own shadowy dreams.