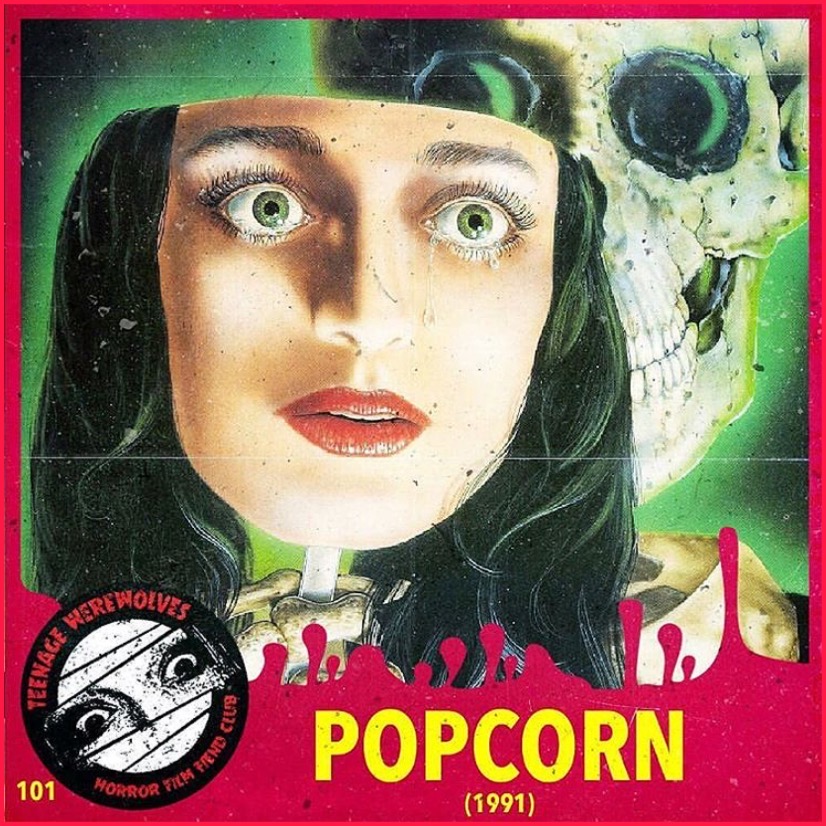 The oddly disturbing — and borderline hypnotic — artwork adorning the original one-sheet for Mark Herrier and Alan Ormsby’s 1991 foray into the cinematic ballyhoo of horror’s yesteryear, POPCORN, is, no doubt, indelibly imprinted in the minds of horror fans over the age of 35.

At it’s very core, the film is in some ways as self-reflexive as later genre films (Craven’s SCREAM and NEW NIGHTMARE, for example, as well as Carpenter’s IN THE MOUTH OF MADNESS, among others) though, perhaps, with less of a postmodern approach to the proceedings. Starring genre favorites Jill Schoelen and Dee Wallace, the meta-cinematic POPCORN is pure entertainment from beginning to end, with it’s film-within-a-film premise, slasher-esque underpinnings to the narrative, the absurdity of the killer, and the credible homages to beloved films of the 1950s and 60s. Shot in Jamaica — something slyly communicated via Paul Zaza’s score, which is deliciously punctuated by contributions from reggae hopefuls Ossie D & Stevie G — and subject to some convoluted controversy surrounding the replacement of original director, Ormsby, and the substitution of the original lead with Schoelen just three weeks into the production, POPCORN was originally panned upon release and succumbed to box-office failure. Despite these visceral facts from the cinematic cemetery, the result is a somewhat mind-bending one, and an under-appreciated treasure trove of genre talent and tomfoolery to be re-visited at all costs. Thankfully, Synapse Films recently restored and released POPCORN on blu-ray, meaning there are no excuses for missing the big show at the Dreamland theatre.

Released on this day in 1991…we present to you: POPCORN…giant mosquito, electrified seats, grinning skeletons, “odorama,” and shock clock not included. Let’s all go to the lobby, Fiends, and get ourselves a treat…more popcorn!