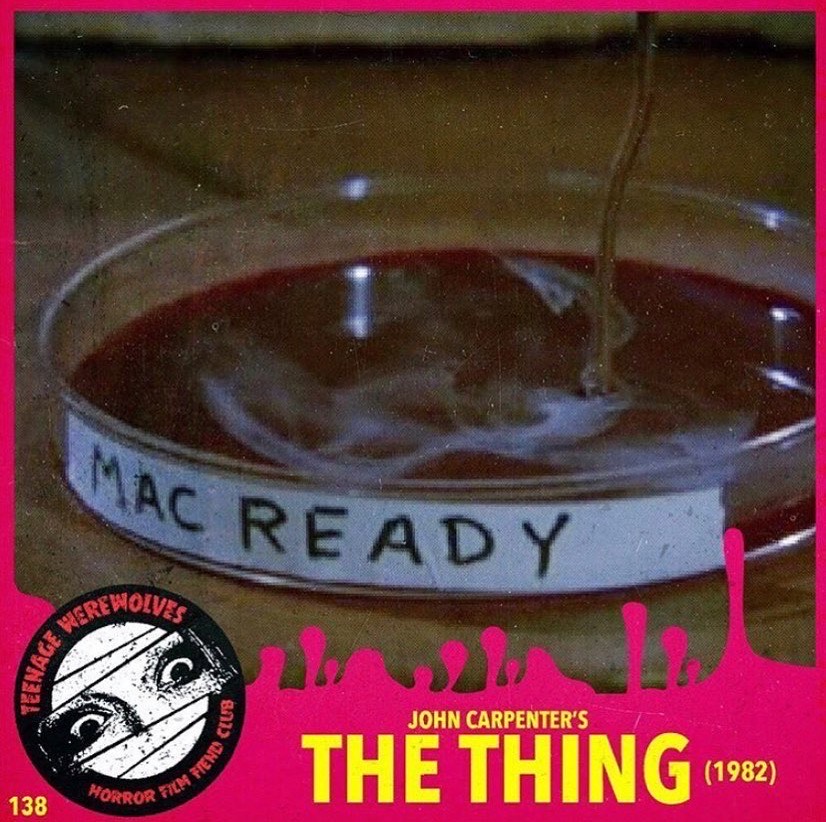 “Nobody trusts anybody now. And we’re all very tired.”

It is no secret that on the 25th of June 1982, John Carpenter’s THE THING was released to bewilderingly negative, even scathing, reviews. Described by critics as “instant junk” and “a wretched excess,” Carpenter’s existential exploration of extraterrestrial infiltration amidst an Antarctic research outpost wasn’t quite what the summer-blockbuster audiences were ready for, especially when we consider the the context of its release; the summer of 1982 had already been taken by storm by a far more gregarious, family-friendly extraterrestrial who was more content to “phone home” than he was contemplating the wholesale eradication of the human race as we know it.

What should have been immediately received as a cinematic revelation, anchored by it’s all-male, ensemble cast (resulting in proceedings that, like many of Carpenter’s “siege-films” have a far more decidedly Western aesthetic to them than often given credit for), and its questions of human dynamics and the impact of paranoia all set against a harsh, cruel, and dehumanizing landscape of ice and snow, was seen as anything but an overt cinematic failure. Cinefantastique famously put a cover story to press which ruefully pondered, “Is [THE THING] the most hated movie of all time?” Thankfully, time has been far more than kind to what is, arguably, Carpenter’s masterpiece, as more often than not it is regarded (despite its science-fiction leanings) as one of the greatest horror films ever made.

Carpenter’s film is, of course, a reworking of the 1951 Howard Hawks-Christian Nyby production of THE THING FROM ANOTHER WORLD, but is, in all reality, more accurately described as a far more nuanced extrapolation of the the original source material, John W. Campbell’s novella, Who Goes There? Proving that there is absolutely a place for remakes — and that they CAN surpass the original when creatively conceived, and when placed in able hands — Carpenter’s reimagining also remains one of the genre’s bleakest entries: it is visceral, meditative, singular, and essential. Often nihilistic and emotionally exhausting for all the right reasons, THE THING is drum-taut, wonderfully devastating and beautifully realized. It is awash in cold blues, icily reflecting the emotional issues at hand which, arguably, are palpably colder than the isolating barren setting of Outpost 31.

The Morricone score is decidedly “Carpenter-esque (even featuring snippets of the director himself scoring certain pick-up scenes) and is overtly evocative, simple, and terrifying…promoting a peerless paranoia at every turn. Combined with Rob Bottin’s groundbreaking special effects and the prowling cinematography of Dean Cundey’s Panaglide (which, like an unseen entity, seems to haunt to compound with reckless abandon, disturbingly furtive and evocative of that dangerous other we so often fear), THE THING continues to endure, staying relevant in times of turmoil and societal distrust.  Today, the deadpanned words of Macready (Kurt Russell in a commanding performance of the “reluctant hero” archetype), intoning that “Nobody trusts anybody now. And we’re all very tired,” carry undeniable weight…especially when, far from the seats of the local cinema, political discourse has us all frozen in an existential deadlock of our very own, mired in a pandemic of seemingly incalculable odds and a common enemy of viral proportions. Currently, the plight of Outpost 31 seems all too familiar, and its purported nihilism has become our emotional neighbor; questions as to Who is safe? and Who has been infected? take on a new and deadly import as, like the dog-cells in Blair’s microscope, the Coronavirus shows no signs of slowing. All of this is what grants Carpenter’s film its immense power. Decades later, even after what seems like hundreds of screenings, the Petri dish blood-test scene is still incredibly effective, often causing the viewer — no matter how deeply one is entrenched in its legacy — to lose themselves in the anxiety-laden proceedings and forget who the “thing” is altogether. And furthermore, with the exponential proliferation of social media within our daily lives, existentially, it is increasingly more difficult to separate the real from the imitations. So few films retain that efficacy and influence, and of all the screenings with our Junior Fiends, THE THING still remains a high horror watermark, frozen in time as an absolute student favorite.

️This summer (or this winter, even, as its cultural shadow seems omnipresent and fitting for almost any seasonal situation), celebrate the anniversary of THE THING’s original release with someone you love, but, perhaps, screen it outside…so that you don’t have to spend the rest of the season tied to your fucking couch. Safety first though, Fiends…so wash your hands, prepare your own meals, and WATCH CLARK…and watch him good.