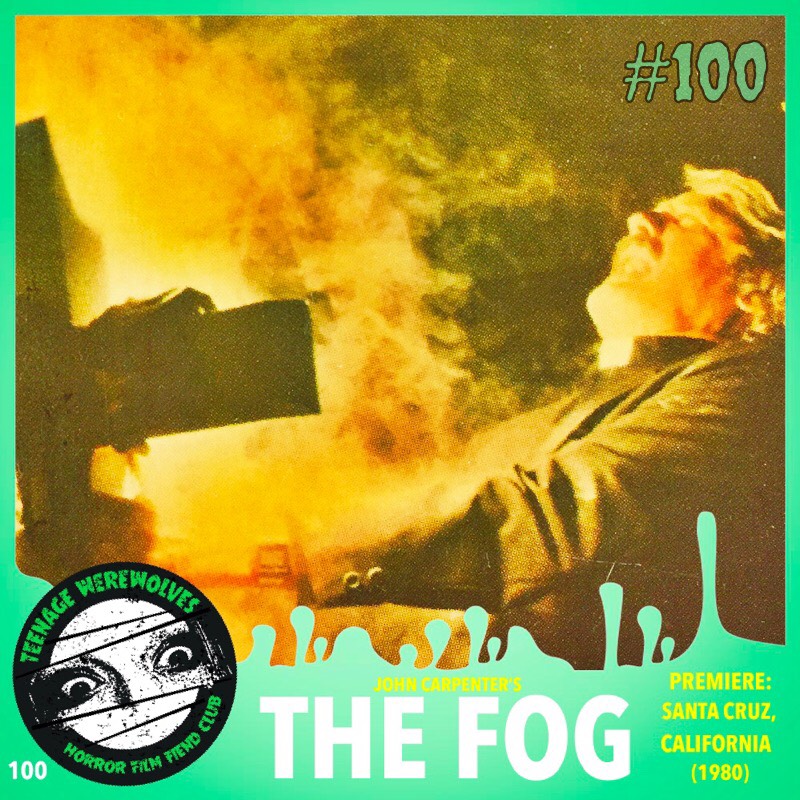 “To the ships at sea who can hear my voice…look across the water, into the darkness. Look for…the fog!”

It’s 11:55…almost midnight…and today marks a murderous milestone for the TWHFFC. It has been an honor to discuss and explore so many of our favorite genre films on the anniversary of their original release, and we’ve finally hit 100. From the outset, the Teenage Werewolves Horror Film Fiend Club has placed great emphasis on a “horror celebration through horror education” approach, and our mission of #savinghorroronekidatatime has afforded countless opportunities for academic autopsies of the cinematic variety…and today marks the initial release of an intensely beloved film: John Carpenter’s THE FOG.

Originally slated for a Christmas release in late 1979, Avco-Embassy’s then-president, Bob Rehme, opted to push the release until February 1,1980, when major box office competition from other films would be at an expected minimum and more theater screens available for John Carpenter and Debra Hill’s follow-up to the mythic HALLOWEEN. An impressive 600 prints were eventually distributed, but the crisp February evening marks the initial premiere held in Santa Cruz, California, where actual fog-machines were on-hand to augment and heighten the supernatural atmosphere contained therein. One week later, THE FOG spread across the country like so much swirling, cinematic mist, and — despite a barrage of reshoots and concerns from Carpenter that it was a failure in regard to scares — proved to be a commercial success for Carpenter (despite some mixed critical reviews). THE FOG is an unabashed, old-fashioned ghost yarn, anchored far more in the waters of Val Lewton and Jacques Tourneur (or even Mark Robeson’s ISLE OF THE DEAD) than the bloody knives of Carpenter and Hill’s own Haddonfield holiday and its lesser offspring.

This nautical tale of a cursed seaside town and the vengeful pirate ghosts that rend it asunder is as effective now as it was then; it delightfully marries Carpenter’s renowned 2.35:1 anamorphic widescreen approach, Dean Cundey’s effortless cinematography, a chilling mythology, a haunting score of epic proportions, a stable of reliable character actors, and movie-magic so convincing, we’d swear those eddying tendrils of fog were sentient. Though Carpenter has professed his appreciation of the film, opining that in many ways it is a “minor horror classic,” he and producer Hill feared that they had a failure of a film on their hands and what had been shot simply “didn’t work.” In the wake of the seeming blood-orgy of other 1980’s cinema fare, THE FOG does feel a world apart, more at home rubbing cinematic shoulders with films released five decades earlier than with the neon thoroughfares of the local mall and its typical teens-in-peril approach. However, this is exactly where —and arguably why— it resoundingly succeeds, existing as an old-fashioned ghost story on par with the Victorian tales that helped give rise to the genre in the first place. This is, perhaps, the subtle edge that gives THE FOG its lasting power; despite its humble pedigree and purportedly archaic foundations, it is a ghost picture that is far more interesting in haunting the audience than terrorizing them. Despite suffering those aforementioned reshoots in order to smooth out what were decided to be thin, narrative hiccups and, most explicitly, to add the competitive gristliness Carpenter felt the film so desperately needed, THE FOG most certainly works…and it continues to do so. Its story is as archetypally sound as the grizzled old salt, Mr. Machen (John Houseman), who initially narrates the campfire tale at the heart of the film–the ghosts that descend upon Antonio Bay are of the worst kind: historical sins of the past. And this most certainly where the “ghost story” as a cultural medium gains its most powerful momentum: the spectral yarn is one that brings us all together — collectively huddled in the dark, fearing what lies beyond our own mortal coil as much as what we fear lies just beyond the light of the campfire’s dying embers —and can be enjoyed by almost any audience. Certainly, Carpenter’s film is no exception.

From the opening epigraph culled from the work of Edgar Allan Poe, Carpenter and Hill give us wink and nod that we are descending into a maelstrom of horrors past. The engaging opening credit sequence, though certainly not as long, can easily be noted as possible prelude to the epic sequence contained in 1987’s PRINCE OF DARKNESS, or at the very least displays Carpenter’s immense talent for instantly captivating an audience with a series of seemingly simple images through a montage with unassumingly malevolent intention. It is this very gift with which Carpenter sets the audience adrift in a memorably mysterious and cinematic sea, where only our nerves can guide us through the roiling brume. Blake and his phantasmagoric ship-mates will forever haunt our horror-laden hearts, and not only is it one of my all-time favorite horror films, but it steadfastly remains a beloved Club selection as well. Ghostly hands are assuredly at work for Carpenter’s film to coincide with our numeric milestone, so meet us at the KAB lighthouse to celebrate with full sails, Creeps. See you at the bottom of Antonio Bay!