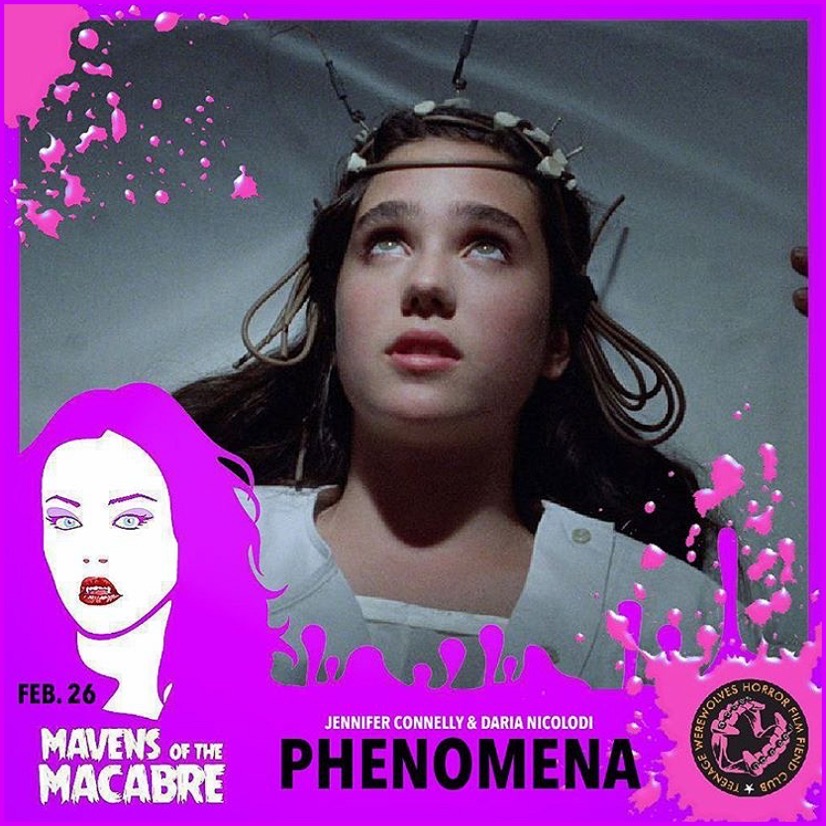 “The wind, yes…some people get headaches. When it blows, there are those who say it causes madness. It’s a strange part of the country…the Swiss Transylvania.”

It was determined that most Americans couldn’t pronounce “phenomena,” and thus, Dario Argento’s film was released to Stateside audiences as CREEPERS in a convoluted print excised of roughly 30 minutes, senselessly butchered to account, presumably, for length and gore.

Ignoring the truncated edits made available in a myriad of markets, PHENOMENA, in its 116 minute entirety, is one of the more divisive installments in the Argento filmography as it tackles a superfluous amount of narrative threads, and though cited by some as a haphazard effort, Argento purportedly regards it as a personal favorite. At the time production began, however, Argento expressed an initial melancholic hesitation, confiding to filmmaker and friend,  Michele Soavi, that “There are 450 special effects in PHENOMENA. I feel, I don’t know. I should feel happy, but instead, I feel very sad. I mean, I have doubts about my ability to make this film.” Doubts that, in all reality, are unfounded — especially with 35 years of distance with which we can now view Argento’s art. However, despite deftly balancing moments of unusual tranquility with raw brutality, audiences have, sadly, never really swarmed to PHENOMENA; it rarely secures the acclaim it so immensely deserves and, as a result, was the last Argento film ever to receive a proper US release.

The opening sequence suffused with hills of verdant green, the howling winds of the Alps, clanking chains beckoning from within a forlorn cottage on the edge of the forest, and the dissonantly ominous arpeggio of a Bill Wyman & Terry Taylor composition all culminate in a vicious, giallo-esque beheading of a young girl (played by Argento’s own daughter, Fiore), complete with scissors and the breaking of glass, boldly set against a torrential flume of glacial waters. At once, Argento commandingly presents his audience with an atmosphere of dread in almost mystic proportion, executing what eventually seems a hybrid of both branches of his filmography thus far: A film uniquely straddling the worlds of the esoterically supernatural and the realistic grand guignol of the gialli. Argento takes the blood-soaked crime thriller out of the streets of Italy and transplants it to the crisp mountain air of Zürich. It is here, in the “Swiss Transylvania,” where we meet our young protagonist, Jennifer Corvino — a plucky transatlantic student, introduced with a brief, expository voice-over à la SUSPIRIA — and her unlikely consorts: A Scottish forensic entomologist, a pet chimpanzee, and six million insects.

One of PHENOMENA’s more intriguing aspects explores the unique dynamics at play when both protagonist and antagonist are female, giving way to potent thematic threads of motherhood, maturation, and, as is common to gialli, brutal violence toward women (most overtly seen in the car-ride sequence where the behavior of the two young men can only be described as sexually-aggressive, the cruel bullying at the Wagnerian girl’s school, and the string of murders themselves). Jennifer Connelly is engaging as the headstrong young American with somnambular tendencies, psychologically brutalized in a nightmarish boarding school nestled amid Swiss mountains of mysterious repute. Her character lies at the center of a Freudian web of grotesqueries, treated much like the insects with which she communicates, and, as a child of divorce cleaving more to her father, there is a compelling dichotomy established between her and Daria Nicolodi’s headmistress, Frau Brückner. Brückner herself is at the center of a troubled past-made-present, given her violent experiences at the institution which, more than likely, have resulted in the symbolic manifestation of her son’s unnerving condition (…but to continue is to say too much, to betray the hunt for those devils in the details.) Oddly enough, the dark fairy-tale trappings combined with Argento’s dreamlike neo-mysticism make PHENOMENA almost an insane parallel to Connelly’s other 80’s property, LABYRINTH, which is, itself, an aphotic ride into painful adolescent maturation and the existential underpinnings of a world colored by chaos.

The Giallo-Argento cognoscenti out there should love and whole-heartedly embrace this film — we certainly do — but, as discussed, it has its detractors. Horror academic Kim Newman initially panned the film, citing “awful performances” and a “tiresome color palette,” and The Guardian saw it as “throw away” Argento. Many have taken issue with the “incomprehensible choice” to muddy the Claudio Simonetti/Goblin score — and thereby the overall mood — with metal tracks from Iron Maiden and Motorhead, among others. Critic J. Kenneth Muir, however, later demurred, arguing that in all actuality the film is “strangely stirring” and rife with the “amazing imagery” Argento is known for. Others have since offered that it is Argento’s “battiest and most spiritual landscape,” where he effectively uses his familiar aesthetic to explore the psychological “reflection of the human body to its psyche as its own worst enemy.” PHENOMENA is due for a reappraisal (as the 2017 sumptuous release from Arrow Films, which includes a 4k restoration from the original negative, would suggest), and thus is officially Official Fiend homework for the initiated…and for those Fiends who are overdue for a visit to the land of maddening winds. Dark woods, faceless killers, and telepathic insects aren’t the only anomalous forces at work here, and approaching Argento’s film with a perspective more attuned to the women of the narrative makes for a singular exercise.