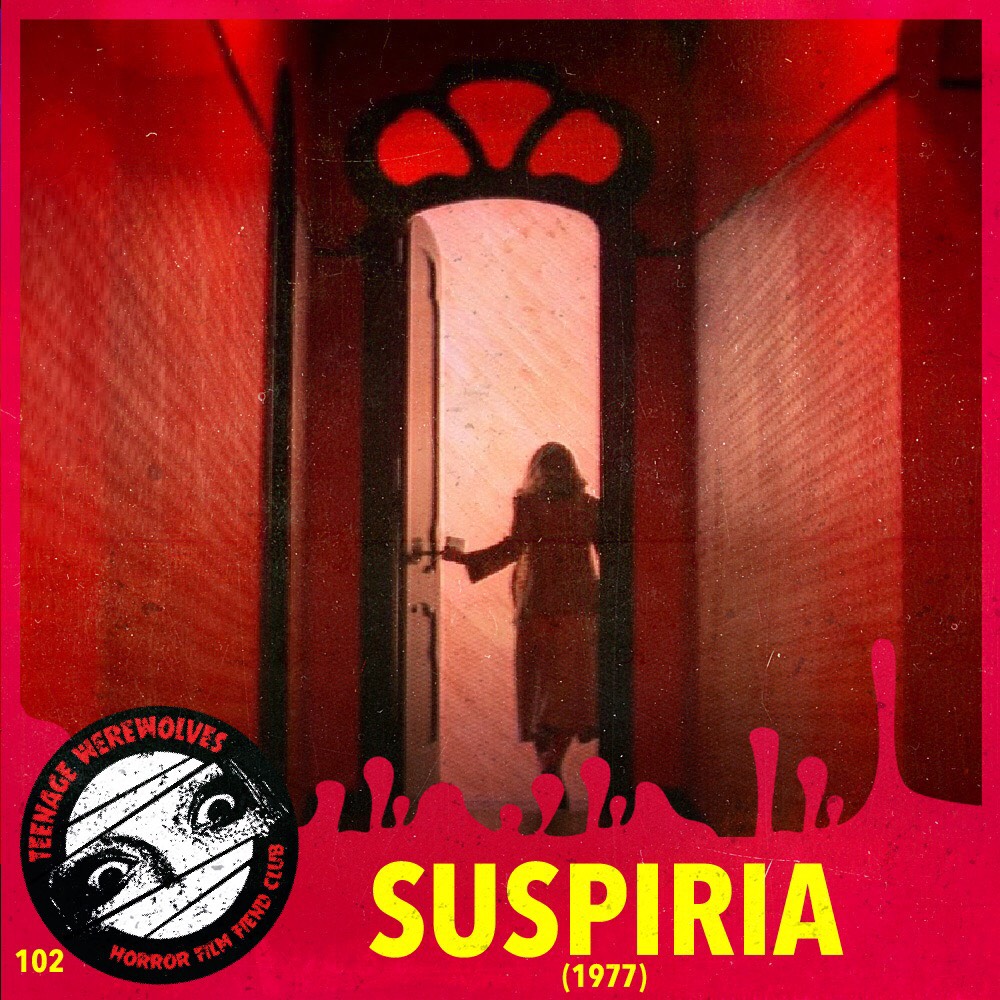 On this day in 1977, Suzy Bannion decided to perfect her ballet studies in the most famous school of dance in Europe. She chose the celebrated academy of Freiburg…[and so] at nine in the morning, she left Kennedy airport, New York, and arrived in Germany at 10:40 p.m. local time…and thus began our intense love affair with Dario Argento’s visual masterpiece and cinematic fever-dream, SUSPIRIA.

Co-written (according to most sources) with then-partner, Daria Nicolodi (PROFONDO ROSSO, PHENOMENA) and partially based on the esoteric studies of Thomas De Quincey’s 1845 exercise in the “impassioned prose of psychological fantasy,” Suspiria de Profundis, Dario Argento’s SUSPIRIA is a touchstone text in the world of cinematic study; it is one of the more poetic works from an internationally-recognized master of horror and, perhaps most importantly, an auteur of style sans pereil. As the accompanying illustration above suggests, there is much to be made of SUSPIRIA’s overtly archetypal meditation upon the crossing of thresholds and the entering of strange, dangerous, and powerful worlds. Like Alice before her and that familiar peek behind the looking-glass, SUSPIRIA’s Suzy Bannion first leaves behind that “ordinary world” professor, author, and arbiter of the monomyth, Joseph Campbell, oft discusses when she passes, in the neon-soaked airport, a travel poster advertising the Black Forest of the Rhine, thereby invoking a oracular baptism via the pummeling downpour of Germanic rains. Aurally heralded by the bombastic sound of the pneumatic doors, we immediately become accustomed to an explicit shift in atmosphere, art direction, color palette, and the telltale signposts of an overwhelmingly new — and consequently, alien — landscape, signaling that Suzy Bannion has forever crossed over to some other stage in her existence. More often than not, Argento’s characters find themselves captured in often the most voluptuary of locales, environments that are somehow spiritually arabesque and saturated in some strange dichotomy between the daily and the disorienting; with Herculean efforts often far loftier than their own resolve, they become hopelessly trapped within a labyrinth of literal or circumstantial design (a network of meandering physical puzzles as ornate as the psychological underpinnings of Argento’s plotting), where, more often than not, it is death who waits at the end. The sprawling corridors of Freiburg’s Tanzakademie is one of these such places — as is Mater Tenebrarum’s posh New York City apartment complex of the damned in SUSPIRIA’s spiritual sequel, INFERNO (1980), and the “Villa of the Screaming Child” in PROFONDO ROSSO (1975) — an architectural foray into a maelstrom of madness, not unlike the thematic aims of neo-gothic author Shirley Jackson. Argento himself has commented on this very aspect of his process, citing that “I’m inspired by architecture—the beauty of certain neighborhoods, the mystery in odd buildings, or streets that suggest psychoanalytic theories” (Bollen). It is the navigation of these involving locales, with their utter absence of reason, that pulls Argento’s characters forever onward. The curmudgeonly taxi-driver has as much control over Suzy’s fate as the male voice-over intoning and narrating her life’s events (similar, in many ways, to our expository initiation of Jennifer Corvino in Argento’s other masterpiece, PHENOMENA), and the cacophony of the torrential deluge’s waters signify that Suzy is on a journey as much about crossing over as it may be about losing one’s self and not returning.

There is something so haunting here, and sometimes one isn’t even sure exactly where that sense of unease is even coming from…though often it comes in the form of subtle changes in camera angles; SUSPIRIA is rife with shots where the camera winds and roams the hallways of the Tanzakademie, the pool, the temporary dormitory, and even the outer world as well (note Argento and cinematographer Luciano Tovoli’s use of this technique within Daniel’s tragic sequence at the Königsplatz and the sequence with Frank, Professor Milius, and Suzy outside the psychology symposium), suggesting some omnipresent, but invisibly malevolent force, in control and often alighting into the skies. We aren’t even sure how much of Goblin’s iconic and terrifyingly bombastic score is meant to be some bizarro version of diegetic sound. And perhaps, in the end, that’s what is so terrifying…SUSPIRIA’s firm stance in overt ambiguity. Razor wire, disturbingly eerie eyes in the dark, sheets of German rain, and mystery balanced upon mystery…we never tire of this one. This Argento classic is something entirely all its own, forever remaining the technicolor nightmare it always has been.

This is a film delightfully dominated by females, where the few male characters are all neutered in some way — either emotionally, stylistically, or physically — and Suzy Bannion’s plight of the outsider drawn to the center of a nefariously esoteric (if somewhat unclear) plot is as archetypally familiar to us all as a fairy tale. The bewildering disorientation ranges from the overt to sinisterly subtle. The doorknobs abnormally placed at head-height, for instance, turn adult women into almost Lilliputian shades of their former selves (recalling the adventures of Lewis Carroll’s Alice), often coupled with dialogue far more befitting of boarding school rapscallions; the secret flowers, the coven of wicked witches, and surrounding forests of impenetrable darkness only add to the film’s fable and fantasy. Suzy cuts a diminutive figure against the looming doorways, the extravagantly rococco wallpaper, and the “consistency of SUSPIRIA’s coulour strategy, in which the riotous dayglo colours embody the hysterical, hypersensitive world of witchcraft and sorcery” (McDonagh 144). It is a “lunatic palette” marked by so many secrets, most integral of which is the secret of the irises — a tromp l’oeil doorway hidden away amongst the enchanted spires, stairs, and arabesque lines of the mural adorning Madame Blanc’s wall — directly anchoring Suzy within a context of far-away kingdoms and the fantastical lands of storybook tales; she is a stranger in a strange land of Technicolor reds, yellows, and blues, rendered in a surreal kaleidoscope, and it is she who must trepditiously waltz even deeper down the rabbit hole to defeat the wicked witch and restore balance to the world (McDonagh 146). The rich and lustrous sado-erotic imagery, deliriously encoded within the familiar pageantry of a children’s fairy tale (and perhaps, in many ways, the traditional folktale as well, so often suffused with as much psychoanalytic potency as it is a didactic of morality), is one of SUSPIRIA’s greatest strengths. Fittingly, Argento has emphatically declared that one of SUSPIRIA’s chief influences is Walt Disney’s 1938 retelling of the Snow White story. SUSPIRIA is clearly a dark universe of faux-näif, never intending to subject itself to the reality in which we inhabit, but rather what Argento renders is a universe of Jungian symbols where — according to the director himself — the “borders between psychology and magic is very easy to cross,” making the demarcations seem tenuous at best (McDonagh 245). Argento continues that the nightmare logic of Tanzakademie, the acolytes of Helena Markos, and all that they summon is very much “like a dream. Or like a seance. Or like psychoanalysis” (McDonagh 245). Argento’s stylistic funhouse of enigmatic horrors concludes with an onslaught of forces simultaneously powerful, supernatural, and — most importantly — elemental, all of which Suzy narrowly escapes: wind, fire, and water, all destructive and inexorable.

De Quincey’s essay, “Levana and Our Ladies of Sorrow” (culled from the aforementioned Suspiria de Profundis) is what led Argento to explore the world of the Three Mothers — evil sisters of varying age, locale, and power — in his trilogy, which was finally completed in 2007 with MOTHER OF TEARS, and yet treading in the work of others tends to be a fairly unique exercise. Argento has always been reluctant to adapt the work of another writer, preferring his own creative constructs, or, at the very least, to dramatically reconfigure a nucleic scenario from some external source (consider, for instance, the fact that 1970’s THE BIRD WITH THE CRYSTAL PLUMAGE owes a considerable debt — to some degree at least — to Frederic Brown’s 1950 pulp-detective novel, The Screaming Mimi). Even his “The Black Cat” segment from TWO EVIL EYES, Argento’s exploration of Edgar Allan Poe, who has always served as a massive influence upon the Italian auteur, is more homage than overt adaptation: it is rife with allusions to a myriad of stories, as well as Poe himself. (One can only wonder what would have been yielded had Argento opted to take Dino De Laurentiis up on his offer of the rights to several Agatha Christie properties.) Regardless, SUSPIRIA — and its sequels, which expands upon the mythology but tread even less overtly in the fairy-tale logic of their predecessor — is sourced from the opium dreams of De Quincey, but most certainly is filtered through the rabbit hole of Argento’s baroque and disquieting aesthetic.

Screening this film for the students and junior members of the Teenage Werewolves Horror Film Fiend Club each semester is quite the rewarding experience; sharing this film with the uninitiated, hearing their thoughts, reactions, and interpretations is a rare and valued feast. Witnessing ideas and impressions untainted by allegiance or nostalgia unfold can be a beautiful thing to behold. Once we take “narrative” out of the equation (as Italian cinema often asks us to do), it is incredible to hear young people voice opinions, academically decode, and seriously pursue the deconstruction of what exactly Argento presents to us through sound, color, aesthetics, and atmosphere. [It must be noted that, sadly, strict adherence to narrative is often where students are encouraged to go…and equally as often, they are coached to “stop” there. Correcting this misguided approach is some of the work we are so interested in, Fiends.] We’d be remiss if we didn’t dedicate at least a few minor moments to exploring exactly how prepared were we for a SUSPIRIA remake. Were we prepared to give ourselves to the dance of another, and a completely new dance at that? ‍Luca Guadagnino’s reimagining of Argento’s classic is more of an inversion and a reimagining than anything: it boldly Argento’s stylistic color palate for a starkly monochromatic Berlin; it explores far more overtly the political hierarchy of the coven; and it is far more exploratory with regard to the characterization of Suzy. Removing the fever-dream that, perhaps, helps grant Argento’s film its monolithic power to begin with is a bold move, and one that begs the question of exactly what the rules of a remake are. Dario Argento’s SUSPIRIA looms large in the cultural zeitgeist of significant horror cinema, leaving many to wonder if a reinterpretation is warranted, and may be a question as dangerous as a room full of razor wire. Argento poses a provocative query that, ultimately, he seems to have no explicit interest in answering at all: Do you know anything about witches? Well, do you? Do any of us, really?

For further reading (and, arguably, required reading at that), students worshipping at the arcane altar of Helena Markos, the Mother of Sighs, would do well to explore Alexandra Heller-Nicholas’ Suspiria edition of the ongoing “Devil’s Advocates” series from Auteur Publishing (who, like us, is academically dedicated to “exploring the classics of horror cinema”), as well as the recent Dario Argento autobiography, Fear.