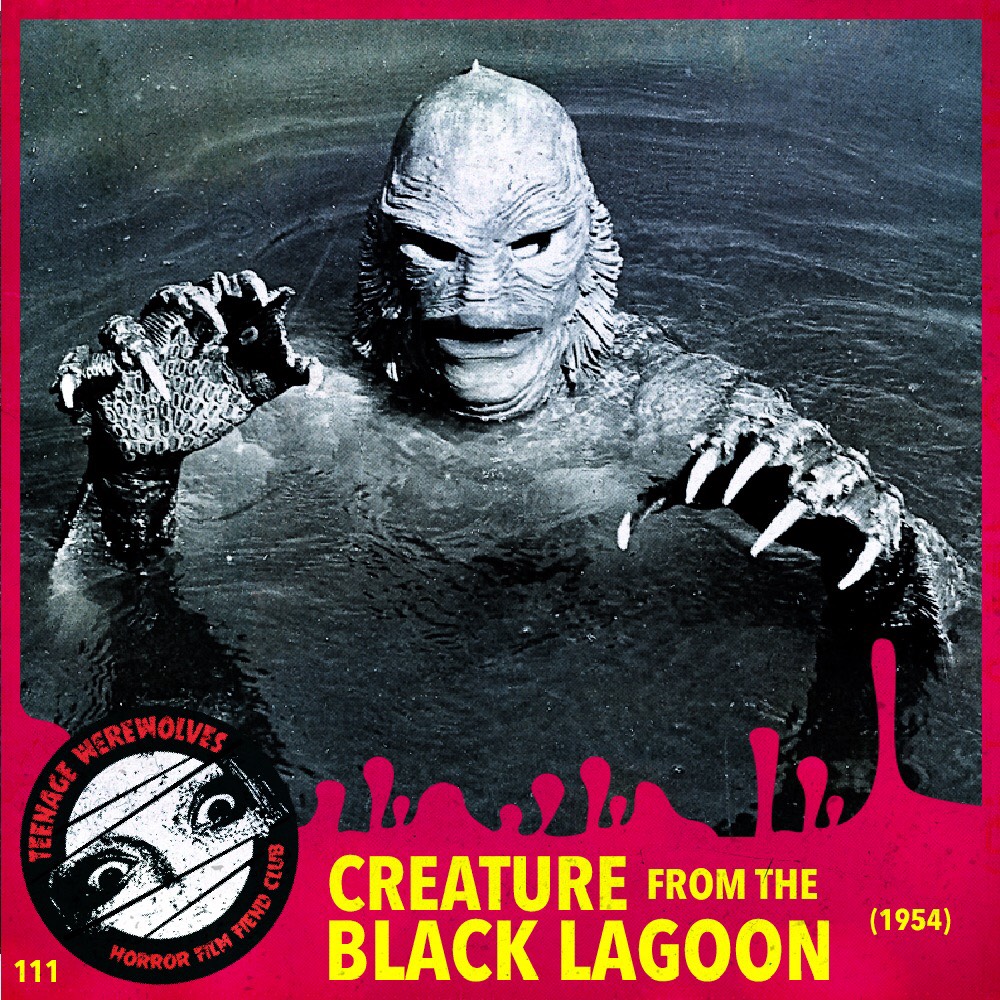 “Centuries of passion pent up in his savage heart!”

Though it first premiered in Detroit on February 12, Jack Arnold’s 3-D thrill-fest, CREATURE FROM THE BLACK LAGOON, was released regionally to most markets on this day in ‘54. Our torrid love affair with the film and its eponymous monster is no secret: it’s a timeless tale of obsession and conflict, of evolution and of Devonian throwbacks, and it is most certainly a tale of callous environmental destruction.

It’s been argued that in addition to being one of the most popular horror films of all-time, CFTBL is also recognized as one of the first Freudian science-fiction films; it is simmering with sexual conflict, as well as familiar archetypes which haunt humanity to its very core: our inherent obsession to possess is almost as strong as our drive to destroy, and as much as we strive to unlock the past we often fail to understand ourselves in the present. CREATURE FROM THE BLACK LAGOON is also a film that repeatedly offers the audience a dichotomy of ideas both modern and outdated. Julie Adams’ Kay is a uniquely independent woman, holding her own against her male peers at the institute (much of the subtle nuance of dialogue and visual semiotics laced throughout create this context for us), yet at the same time, the woman-as-object-of-consumption and lust feels as antiquated as the film’s contemporaries or even those that precede it. However, we must consider, too, that the Gill-Man’s yearning for Kay (perhaps to replace the mate we are first introduced to in skeletal form, or perhaps out of sheer curiosity) parallels Mark’s idée fixe on the Creature itself. With the right eye, the film’s subversive ideas become as 3-D as the original film’s release — we can’t ignore the “playing house” gibes or the cigarette and rotenone as pollutants any more than we can the seductive dance between Kay and the Gill-Man.

We’ve been very outspoken regarding Milicent Patrick’s incredible (but buried) legacy in the film industry, as her design for the Creature is outstanding, reigning as the greatest monster suit ever sketched, sculpted, poured, and pulled. To overlook her contributions to film and fail to discuss her in conjunction with Arnold’s film to to make the same misstep and miscarriage of cultural justice that Hollywood has made for the 50 years. She designed one of the most iconic creatures in horror history, and yet, for the most part, her life remains shrouded in mystery. Born Mildred Elizabeth Fulvia di Rossi sometime around the 1930’s, Millicent Patrick was hired by Disney in the ’40’s, making her one of the first — if not the first — female animator for the studio. By 1952, Patrick accepted a job with the make-up department at Universal which was then headed by Bud Westmore (who had unceremoniously replaced Jack Pierce). It was here that Millicent Patrick became known as “the beauty who created the beast,” designing the visage for one of the most beloved creature suits of all time: the Gill-Man. After a promotional tour celebrating both the creative efforts of the comely Patrick and the titular Creature, she was fired by a petty and jealous Westmore, who felt that his limelight had been stolen and that a woman should not have been credited with the design. History indicates that Patrick herself, in fact, openly referred to it as a collaboration with her peers and colleagues, but the furious Westmore was determined to bury Patrick and consign her to obscurity — by all accounts, his motives were anchored in petty jealousy, and he was disgusted that woman should get so much attention. Despite also designing the Metaluna Mutant and working as mask-maker on THE MOLE PEOPLE, Millicent Patrick’s talents and legacy of the genre have largely gone unheralded. A new biography from Mallory O’Meara, The Lady from the Black Lagoon (Hanover Square), seeks to correct that, however, with a deep dive into the Patrick’s mysterious legacy — as well as a parallel narrative exploring the author’s own experiences of industry misogyny — and we consider it essential reading. Celebrate Women in Horror all day, every day.