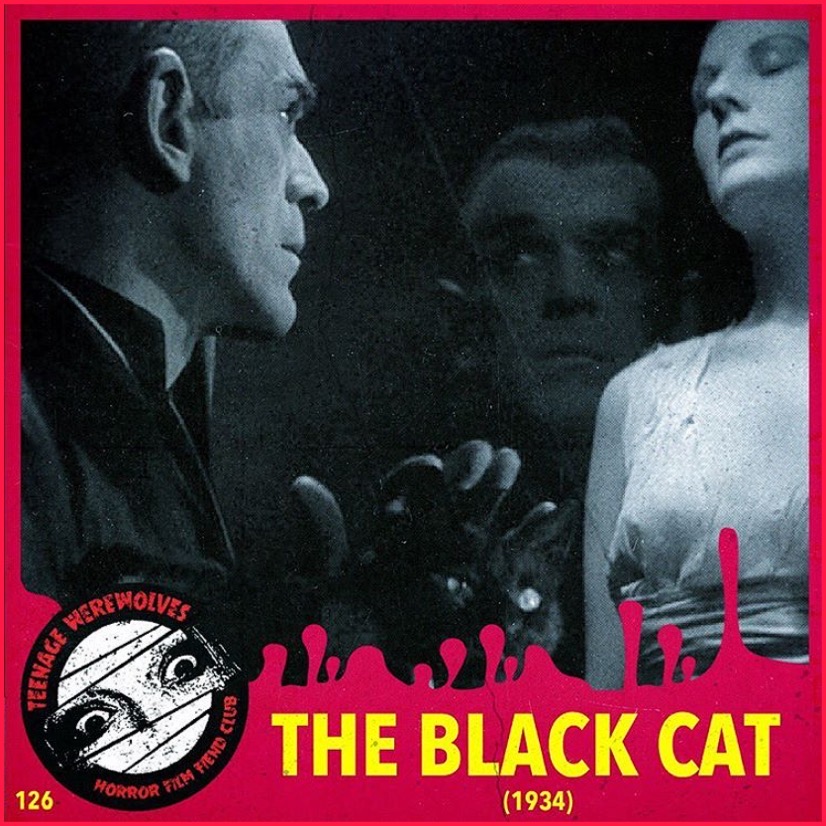 May 7, 1934 saw the wide-release of one of our very favorite films in the Universal horror cycle, Edgar G. Ulmer’s darkly perverse, pre-code, and borderline expressionistic horror show, THE BLACK CAT. In a word, an unsettlingly laconic Karloff is positively magnetic as the icy and sinisterly Satanic architect, Hjalmar Poelzig, who wages a life and death game of cat and mouse within the walls of his Bauhausian fortress of glass, steel, and modernist menace.

The “old dark house” sub-genre gets a serious Art-Deco upgrade in this teaming of Karloff and Lugosi (which is merely “suggested” by a story from Edgar Allan Poe), where a honeymooning couple, through the archetypal “accident due to inclement weather,” is fatefully immersed in an all-out psychological feud resulting in not only a black mass, but a ritualistic skinning as well. The arcane imagery found throughout the film is fairly strong stuff for the 1930’s, and because the Hays code had not yet taken effect, the nefarious overtones of necrophilia and other psycho-sexual elements remain as bold as both the shadows beautifully obfuscating the frame and the performances contained therein. The prowling camerawork of John J. Mescall (which seems an easy precursor to the career of John Carpenter-era Dean Cundey) evokes a masterful melancholy that often catches just the right amount of dark irony and wry sexuality within the frame — the shot of Karloff grasping the nude, female statuette at the moment he decides to possess the young Mrs. Alison (Julie Bishop) as his own, comes to mind; evocative, provocative, and sexually disquieting. Similarly, the glass-entombed body of Karen Werdergast overtly fetishizes her memory, holding her in a striking state of suspended animation, evoking the house’s Bakelite floors and partitions…looking very much like a pale, marble statuette herself (and adorned with tresses that evoke THE BRIDE OF FRANKENSTEIN, released one year later). The use of shadows and bold, contrasting swaths of black throughout the film, too, not only aide the modernist eroticism of the set-design and bleakness of the subject matter, but also allude to the Satanic rituals yet to come in the film’s final act. Though billed as an adaptation of Poe’s fiction, Ulmer’s film seems more anchored in a 20th-century hopelessness not unlike the works of Franz Kafka, the self-styled warlock Aleister Crowley, or even some darker, perverse convergence of D.H. Lawrence and H.P. Lovecraft. All of this menace is undergirded by the unique choice in scoring for a Universal picture — the overt use of classical selections such as Schumann, Tschaikowsky, and an inventive interpretation of Lizt’s “Piano Sonata in B” results in an aura of subtle otherworldliness the young honeymooning couple do not suspect is about to swallow them whole.

Exactly how Ulmer and screenwriter-collaborator Peter Ruric arrived at such an outlandishly depraved and meditative narrative is not clear, but the film’s atmosphere of palpable dread is awash in every aspect of the film, including the dialogue. Though somewhat sparse, the two leads verbally spar with such lethal vigor in each and every line that the glacially-slow pace of the diatribes take on a diabolic connotation, each underscored by the nuance of their respective accents. Though this is one of Lugosi’s strongest performances (albeit one hindered by his confused nuance of scripted dialogue), THE BLACK CAT clearly belongs to Karloff, whose Crowley-esque cool feels like the devil incarnate, not above the perversity of not only marrying Dr. Werdergast’s (Lugosi) late wife, but his daughter as well. Karloff’s Poelzig is so languid and laconic that he comes across as almost corpselike, and considering that his majestic but unnervingly sterile fortress-turned-home is essentially a monument to the dead — the final resting place of thousands of Austro-Hungarian soldiers betrayed to the Russians by Poelzig himself — the performance is a cleverly apt one. In their Film Architecture and the Transnational Imagination: Set Design in the 1930s European Cinema, experts Tim Bergfelder, Sue Harris, and Sarah Street posit that one cannot “disaggregate the function of the set from a number of other consitutive parts of the mise-en-scène, including…the performance of the actors,” explicitly maintaining that Poelzig’s chateau of the damned must be considered in relation to the narrative threads at work, as well as the characterizations and conflicts Karloff and Lugosi inhabit; the archetypal house of horror is now emphatically linked to the spiritual emptiness which followed in the wake of the first World War. Wedergast and Poelzig’s enmity is as entrenched in a titanic battle between the past and the future (and even a bitter rejection of the historical and the nostalgic) as it is a struggle between those opposing ideologies anchored somewhere between good and evil.. Though abstractedly modernist in its design, the final reels of the film bring us back to an establishment of traditional ideals, as the familiar archetype of the “purification through fire,” where the fortress — not unlike the castles and old, dark houses we know so well— is reduced to rubble and order is restored as our intrepid couple share a hackneyed moment of comedic, but romantic endearment from within the safety of a train car. The obsessive and sadistically illicit waves of the “nice, cozy, and unpretentious insane asylum” as David Manners’ Peter Alison sarcastically chides, have broken upon the shores of whimsical idealism, leaving behind only God, hope, normality, and traditional mores of social decorum in its wake. At the film’s close, Alison reads aloud from a review of his latest mystery novel, which criticizes that he “confine himself to the possible instead of letting his melodramatic imagination run away with him,” trumpeting a safe return to the pragmatic, the conventional, the expected, and, essentially, the genericization of everything.

Thankfully, Edgar G. Ulmer was given free-reign with this unlikely Universal property and delivered the successful box-office he promised studio-head Carl Laemmle, Sr…and yet, sadly, Ulmer found himself at the mercy of a personal romance which complicated the roaring beast that is studio politics, and his career was a fairly short one. Luckily, horror fans have this diabolically visionary film to revisit anytime we choose, joining the sadistic cultists at Castle Poelzig, high atop the bloody battlements of the former Fort Marmaros. We only wish we had the stylishly stoic black robes and angular haircut Karloff wears oh so well. Perhaps we can sacrifice the newly-wedded Joan Alison upon an altar, in tribute to Satan, to attain them? Yes? Done deal. And like many of the visual texts covered in the resource, Ulmer’s 1934 THE BLACK CAT is on our syllabus, so consider it required coursework and it should immediately be added to each and every officially Official Fiend’s watch-list.