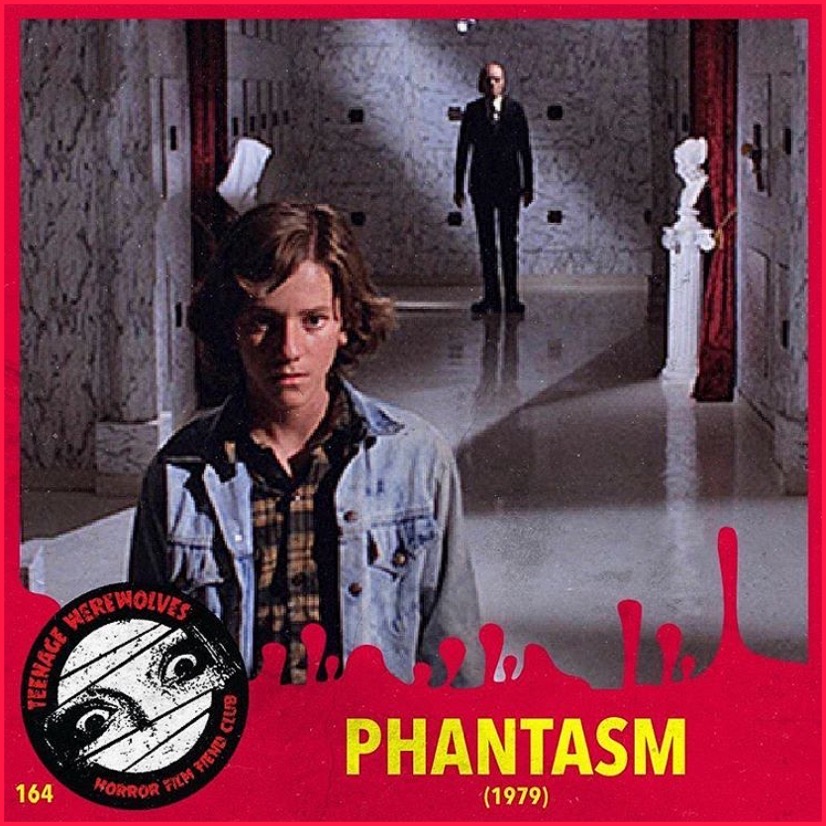 “Is it a nightmare? Is it an illusion? Is it an evil? Is it a fantasy? Is it alive? Whatever it is, if this one doesn’t scare you…you’re already dead!”

These rhetorical questions — accompanied with some fairly bonkers imagery — comprise the original 1979 trailer for Don Coscarelli’s PHANTASM, a film released on this day 41 years ago.

Purportedly inspired by one of Coscarelli’s  nightmares wherein he was chased down endless corridors by an insidious, needle-laden metallic ball — providing, of course, one of its most famous set-pieces — the film is often compared to a fever dream, an amalgamation of seemingly disparate images, convoluted scenarios, logic loops, and a bizarre mythos. Claims that are not unfounded, and yet make for a compelling little exercise in horror cinema, truly living up to its title. Anchored in the Greek word for “image” (“phantasma”) and in “phantasmagoric,” which can refer to disparate, often shifting and disorienting in shape, pattern, and color, or even to a late 18th century horror theatre often held under the guise of a medium-led seance but used one or more magic lanterns to project frightening images such as skeletons, demons, and ghosts onto walls, smoke, or semi-transparent screens to overwhelm its susceptible audience (clearly, a forerunner to the midnight spook show to come more than a hundred years later), Coscarelli’s film delivers on its arcane promise.

Angus Scrimm’s now-iconic Tall Man leads a series of strange goings-on at the Morningside mausoleum (really the Dunsmuir-Hellmann historic estate, also prominently featured in 1976’s BURNT OFFERINGS), which prove to have otherworldly implications…literally…and the rest is horror history. PHANTASM remains a beloved entry in genre cinema, and though a few of its effects are somewhat dated, it still looms large, continuing to impress, entertain, and pull one into a disquieting world of the darkly fantastic. Admittedly, there are few films quite like Coscarelli’s PHANTASM. There is an endearing simplicity to the film’s effects and overall approach that, when coupled with the disparate images, intentionally convoluted narrative, and distortions of time, somehow make the film feel even more like an exercise in overt surreality. In certain circles, some have even likened Coscarelli’s approach to the work of Argento and Bava, where color, cinematography, and sound are all juxtaposed in such a way as to result in something familiarly anchored in reality, and yet palpably disorienting. Arguably, Coscarelli’s use of color, camera, and sound somehow does carry evocative echoes of an otherworldly giallo film — something almost akin, perhaps, to DON’T LOOK NOW — albeit one filtered through more American sensibilities. In fact, at times, it isn’t exactly clear if PHANTASM’s characters are necessarily a part of the reality that we, the viewers, inhabit…its small-town artifice feels almost if it is exactly that: overt artifice with loose connections to an established reality of substance, all of which is underscored by the last few sequences, where the passing of time and the order of narrative events aren’t quite what they seem. Even beloved characterizations such as Reggie Bannister’s heroic ice-cream vendor play to the film’s bizarre whimsy, underscoring even the more subtle dissonance between reality and fantasy which PHANTASM proposes, where our expectations are often manipulated to great effect. Lastly, Coscarelli’s approach to the memorable mausoleum and sphere sequences are yet another aspect where we can see rich juxtapositions: The traditionally gothic is somehow suffused with the futuristic, where the sterile and almost clinical home of the dead with its straight, clean lines, echoing footfalls, and marauding mechanical sentinel feels like another world entire.

In short, Coscarelli has effectively tapped into that dream-logic that so many films strive for but miss entirely. But, again, it is through visual and narrative dichotomies such as these that allow PHANTASM to be its own film entire, all of which are elements considerably heightened and brought into overt clarity by the new 4K remaster at the hands of J.J. Abrams and his Bad Robot team. The sights and sounds of Coscarelli’s vision have never before been so menacing and hypnotic; sequences that, at the hands of your worn-out VHS copy, may have once seem to been dully orchestrated now electrify as they were intended. For instance, the scene in which Mike (Michael Baldwin) recounts his nightmarish experience catching glimpses of Scrimm’s Tall Man lifting the coffin of their late friend into the hearse plays even more ominously, with the previously-difficult-to-discern pattering of rain upon the hearse adding a gorgeous nuance of atmosphere. The sound-mix, especially, brings a powerful presence to the proceedings like never before.

The Fred Myrow and Malcolm Seagrave score is easily as unforgettable as the film it accompanies, and once the main theme’s eight-note dirge of organ, percussion, mellotron, and other primitive, programmable synthesizers, unfurls like a funereal homage to prog — slowed down to a mesmerizing crawl — creeps its way into one’s brain, you may just find yourself praying at the feet of the Tall Man. The classically-trained duo were able to tap directly into the mesmeric fabric Coscarelli weaves, summoning a score that is eerie, involving, and, at certain times, somewhat jarringly incompatible with what one might expect from a horror score. Again, this may deftly play into Coscarelli’s hand, and when taken all in summation, PHANTASM feels far more inventive, orchestral, and unnerving than we may often give it credit for.

Now ubiquitously recognized as a veritable classic of the genre and possessing a perplexing power seldom seen (though, of course, the film has its critics, who conversely consider many of these aforementioned elements to be the film’s source of weakness and nonsensicality), Don Coscarelli’s PHANTASM endures and will most certainly have you questioning whether its an illusion, a nightmare, or something else entire. Coscarelli is a pure distillation of independent filmmaking, the 2016 release of PHANTASM: REMASTERED is essential viewing, and most certainly included on the TWHFFC syllabus.