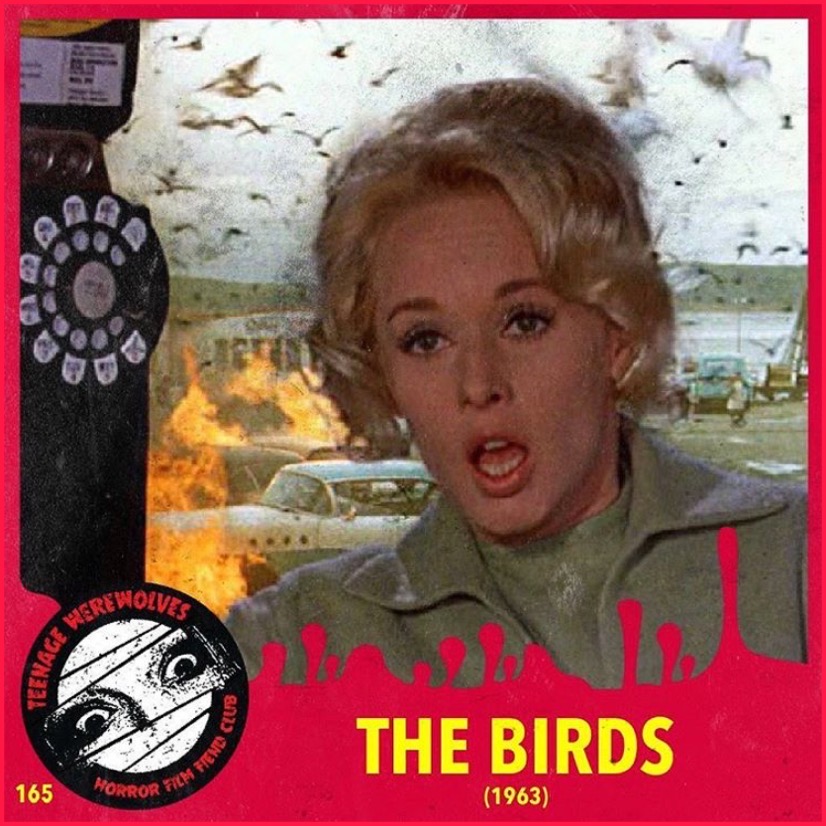 “I hardly think a few birds are going to bring about the end of the world.”

Released on March 28, 1963, and based on the 1952 cautionary tale with eco-implications by Daphne du Maurier — the English author and playwright of such notable genre works as REBECCA and DON’T LOOK NOW, among others — THE BIRDS is a doom-laden exercise told through image and editing, though some may find the premise more horrifying than the result.

A textbook example of Alfred Hitchcock leaving “the novel on the cutting room floor,” THE BIRDS — as conceived and filmed by the legendary auteur — is in many ways the result of Hitchcock’s distaste for his Selznick-influenced production of REBECCA twenty-odd years earlier, where although the film is an accurate portrayal of the source material, the director felt it was “not a Hitchcock picture” and vowed to never film “bestseller material” again. According to author and editor Patrick McGrath, “Of all the short stories du Maurier wrote, THE BIRDS is the masterpiece. Hitchcock filmed the story and du Maurier was extremely displeased with the result. It is not hard to see why. Hitchcock shifted the action from rugged and windswept Cornish coast to the placidity of Sonoma County and subsequently invented a sophisticated plot involving a couple from San Francisco caught in a bizarre struggle with a dreadful controlling mother. The original tail was far bleaker, far more naturalistic, and, as a result, far more powerful.” PSYCHO was, of course, an exercise in restraint, but it was also a playful experiment for the director, and this story of avian chaos was more a return to big-budget form, complete with provocative love story and blond starlet. In hindsight, the romance and its kitschy pet store meet-cute beginnings are one of the more troublesome aspects of the film. In collaboration with screenwriter Evan Hunter, Hitchcock originally reworked du Maurier’s considerably, initially wanting to involve beats of the “screw-ball comedy” as counterpoints to the “stark terror” and an expansion of the universe to include a myriad of townspeople who all seem to harbor some illicit secret; the screenplay, in fact, went through and impressive amount of drafts which increasingly included input from outside sources such as Hume Cronyn and V.S. Pritchett. What Hitchcock jettisons from the original narrative is, for many, what makes du Maurier’s story such an evocative exploration of doom and futility. By focusing only on wounded farmer Nat Hocken and his family, du Maurier limits the scope of the world we see, begging us to consider exactly how much of humanity remains–something Hitchcock deftly extracts with his much more inclusive world of Bodega Bay and the overt focus on relationship-building between a troubled socialite and an amorous lawyer, Melanie and Mitch (played by Tippi Hedren and Rod Taylor, respectively). What most viewers will remember, however, are the avian adversaries, which is just as well. As the story’s original denouement approaches, Hocken wonders exactly “how many millions of years were stored in those little brains, behind the stabbing beaks, the piercing eyes, now giving them this instinct to destroy mankind with all the deft precision of machines,” providing a pessimistic and meditative ending. Hitchcock had other plans entirely, and cut the last ten pages of the screenplay, opting for a far more ambiguous ending to the affair (supposedly even fighting studio executives to remove the “THE END” card from the final edit).

Despite qualms regarding the comparisons between the page and the screen, however, THE BIRDS remains a stunning piece of visual fare and absolutely features some terrifying set-pieces which are, almost always, delivered in tandem with unnerving optical effects, and — more often than not — live birds, all working in terrifying tandem. One scene in particular purportedly provided Hitchcock with the jolt he so loved: the suspenseful farm scene, with a gory pay-off in the form of the farmer’s eyeless corpse, riddled with talon marks, torn pajamas, and a probable pint of blood, was the type of psychological moment Hitchcock could not resist. Regardless of which version you prefer, the failure of humanity during epic environmental disaster leaves a lasting, harrowing imprint and THE BIRDS endures as a cultural touchstone, paving the way for an entire cycle of “animals films in the mid-1970’s (and beyond), which, following Spielberg’s JAWS, included such exploitation cinema as GRIZZLY, PROPHECY, NIGHT CREATURE, ORCA, THE DAY OF THE ANIMALS, THE SWARM, and KINGDOM OF THE SPIDERS.