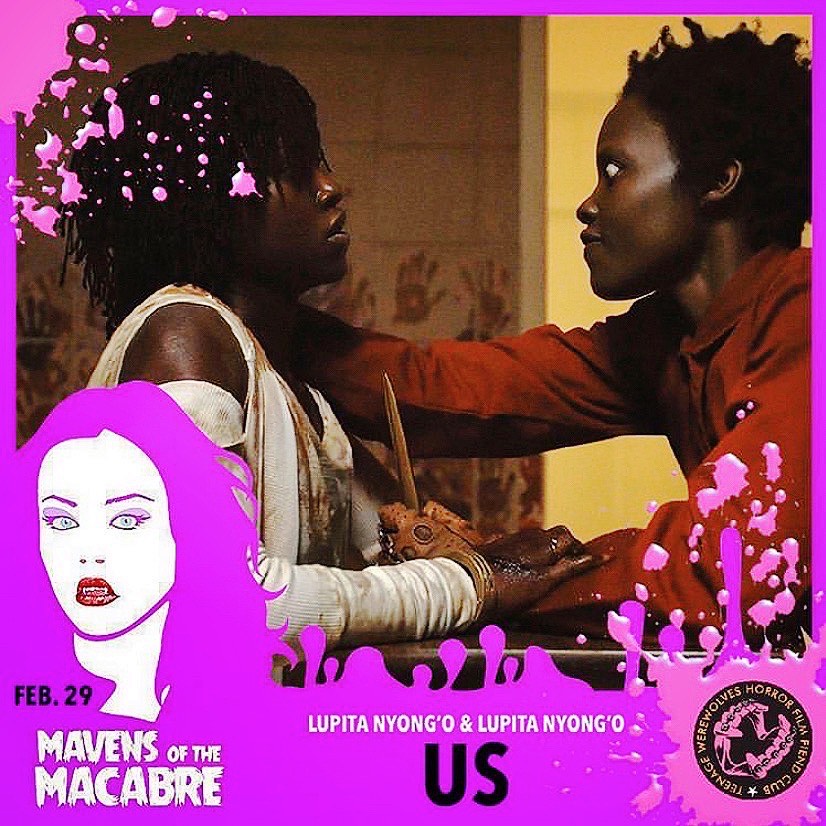 Each year, our MAVENS OF THE MACABRE series celebrates the integral contributions of Women in Horror, exalting female-identifying individuals within the horror community at large — whether filmmaker, feminist, or fan, writing, producing, designing, and creating with aplomb. Last year’s series concluded with Jordan Peele’s US, a film rife with potent imagery and riddled with social — if not personal and political — commentary, where Lupita Nyong’o’s performance chillingly reverberates with emotional wreckage no matter which side of Peele’s narrative coin you choose to peruse.

In a visual narrative that addresses the divide of our country (as well as our own inherent duality, manifesting itself each and every day in a myriad of ways) via familial doppelgängers, Lupita Nyong’o’s portrayal of both Adelaide Wilson and Red is nothing short of poetic, powerful, and full of eerie nuance so effortlessly couched in the horror of the cultural, social, and archetypal other, especially when — as is so often the case — the other is…us. The dual characterizations of Adelaide and Red are the emotional through-line of the film, though they function somewhat differently, and yet never serving as complete, diametric opposites; their motivations and inexorable devotion to their respective familial units bind them more then they divide them. Nyong’o deftly walks a tightrope spanning childhood trauma (or, at the very least, the past in general), the fearlessness of a parent protecting her brood, the inherent paranoia of the imposter, and — in what feels overtly Aristotelian and brilliantly tethered to the roots of classic Greek tragedy — the penetrating the inmost cave of one’s self. The sequences, though as logic would suggest are impossible extensions of reality through editing, pitch-perfect production design, Peele’s disturbing vision, continuity, and assorted movie-magic, never feel cleaved in two despite the fact that what we see unfolding upon the screen is not the orchestrations of an eight-actor ensemble working in perfect concert, but rather the work of only four — yet another example of Peele’s inestimable prestidigitation, always serving the greater gods of theme and narrative intent. The magnetic performance of the Wilson family’s tethered doppelgängers is full of pathos and resonant on a myriad of levels, where tragedy and terror simultaneously inhabit the same crimson-colored jumpsuit, intentionally blurring lines of demarcation.

Jordan Peele has declared that, “In this film, the monster wears our faces,” and Peele’s US allows for so many dynamic juxtapositions for its female characters — Nyong’o, Elisabeth Moss, and Shahadi Wright Joseph — affording them the opportunity to both inhabit and escape the roles of dutiful wives, mothers, and daughters, while also examining that inimical struggle of identity and self that we all face, regardless of gender. Like Red intones when narrating her own dark experiences of the oppositional reality she inhabits, ” there was the girl and the shadow…the two were…connected,” we cannot, as a society, easily divest ourselves from the lives and experiences of others, nor can we easily divorce ourselves from our unwarranted, xenophobic mistrust of the outsider. Peele goes as far as to, through a series clever visual extrapolations of duality — the lengthening shadows of the Wilson family on the beach; the werewolf mask; the subtle shot of a spider crawling on Jason’s rubber toy spider; Adelaide and Red’s grand pas de deux dance routine (a duet delivered here in a seemingly singular form); and the repetition of 11:11 are but a few examples — deepen the classic thematic point that humanity is, perhaps, more akin to the two-faced Roman god, Janus (coincidentally representative of the future and the past, gates, transitions, time itself, duality, doorways, and passageways) than we’d like to admit. US, in many ways, fits neatly into the tradition of the dark and divided self, much like the werewolf legend, the Dr. Jeykll and Mr. Hyde dichotomy, and the “alternate” reality, among others. In Peele’s hands, however, the mythos of inherent duplicity is elevated to far more social concerns. Adelaide Willson’s realization that “They think like us, they know where we are. They won’t stop until they kill us, or we kill them,” is as simple a way to describe our own global experience — especially where the United States is concerned— at the hands of ourselves as anything, where the “bad omen” or “evil twin” elements inherent within the folkloric doppelgänger of old take on a far more political guise. Our perception of self and nationalistic individuality results in a tribalism which reveals our evolutionary truths: that we are animals as capable of destroying our neighbors as we are of obliterating ourselves.

US also grants us another perspective so desperately needed within the genre: A family outside of the Caucasian persuasion allowed to simply be a family, to have singular identities outside the tropes and stereotypes so often handed to us via Hollywood; therein may lie an another of a Jordan Peele’s powerfully tongue-in-cheek ironies. Regardless, Peele’s US possesses a cultural nuance that is, hopefully, another master-stroke toward rolling away the stone. Interestingly, Peele’s films also seems to make a pointed commentary regarding the ineffective (and often empty) collective activism so popular in the 1980’s; his inexplicit “Hands Across America 1986” metaphor is strengthened, perhaps, by the very real confusion of exactly what causes we were fighting and exactly what our televised efforts would result in. Amidst the recent wave of protests, Black Lives Matter dialogues, extreme concerns regarding the role of police in the escalation of urban violence (not to mention the diminishment of human rights), and warring ideologies regarding humanity, race, and the evils of both past and present. Conversely, US carries with it many overtones of revolution, where the realization that all privilege come at a disastrous cost to others…a stance of revolt and engagement that, eerily, mirrors the aforementioned events and volatile discourse in the spring of 2020.

What Peele’s offers his audience, then, is an overt attempt to enter a mirror maze of our own device and creation, where identity is cleaved unto itself and what remains is the visceral rubble of egoic realization: we are our own worst enemy; and will assuredly remain so until we face ourselves, both personally and nationally. And though many argue that Peele’s second feature is less explicit in its messaging in comparison to his debut film — 2017’s pummeling social thriller, GET OUT (which, wearing its horror roots on its cinematic sleeves is, essentially, a vicious reworking of the “brain-transplant film” sub-genre which overtly foregrounds its conversation regarding race) — is, perhaps, far more explicit in its use of dizzying metaphor, symbolism, and motif. From the outset, Peele builds upon genre familiarity; the cleverly placed VHS tapes of CHUD and GOONIES have overt ties to the expository narrative of the Tethered’s tunnel lair and their existential desire to have “their time” up on the surface. His use of the colloquial easter egg covers everything horror from THE LOST BOYS and A NIGHTMARE ON ELM STREET to Kubrick’s production of THE SHINING, creating a rich tapestry that not only deepens Peele’s subversion of expectation, but also adds a nuanced context of subconscious familiarity to Peele’s exploration of critical culpability (and our own capability, for that matter).

With US, Peele perceptively peers through the looking glass and pulls, as it appears his integral voice and career are wont to do, yet another rabbit from his proverbial hat…where our “us” is as dangerous as our “them.”