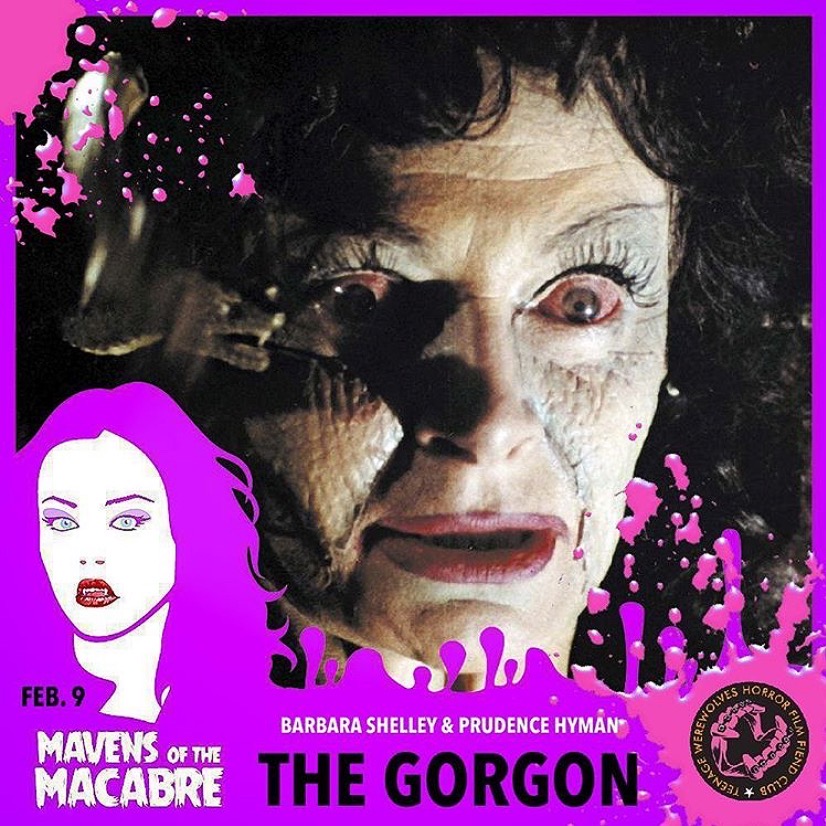 “Overshadowing the village of Vandorf stands the Castle Borski. From the turn of the century a monster from an ancient age of history came to live there. No living thing survived and the spectre of death hovered in waiting for her next victim…”

Undoubtedly one of the most atmospheric of the Hammer films and purportedly one of director Terence Fisher’s favorite projects, 1964’s THE GORGON has a uniquely unnerving quality, rife with potent imagery, an eerily ethereal score, and superb performances from all involved. Subsequently, Fisher’s film was released to U.S. markets on 17 February 1965 as part of a double-bill with THE CURSE OF THE MUMMY’S TOMB. The TWHFFC has made no secret that, despite not featuring Cushing or Lee in what would be considered “lead” roles or that the creature featured is not exactly of iconic pedigree, THE GORGON is a treasure of the genre, and ranks incredibly high on our “Best of Hammer Horror” lists.

Despite the arguably confused storyline — and, perhaps just as arguably, a fairly absurd premise of a mythological creature from the days of ancient Greece somehow taking up residence in, and then ethereally haunting, the grounds of a small German village — the film pays out in a myriad of ways. Under the always able and prolific hand of Terry Fisher (this time with cinematographer Michael Reed and a story from J. Llewellyn Divine in tow) THE GORGON conjures up an easy psychoanalytic read of the “Freudian phallic mother,” delving into the archetypal fears that man has always had of women, even down to the titular femme fatale’s attacks seemingly following a lunar menstrual cycle. The film’s characterizations and conflicts, too, overtly suggest the dangers of the “forbidden woman.” Men classically fear Meagera and yet are drawn to her, both to seeking to sexually possess her and destroy her. Critical perspectives also allow a riveting and timely exploration of the concepts of “the male gaze,” where— cleverly — looking is far more dangerous than touching.

While some might simply see a convoluted attempt at a B creature-feature filtered through the lens of some prestigious, semi-academic monster hokum, THE GORGON is, in truth, a fascinatingly bizarre offering from Hammer which works far better than perhaps it should; there is a curious inventiveness here that — not unlike John Gilling’s THE REPTILE, released a mere two years later — plays with the inherent duality of the werewolf myth. (Curiously, it should be noted that Gilling is credited with the screenplay of THE GORGON, expanding Divine’s story, and perhaps even influencing the snake-woman yet to come.) Not only is this female creature from the annals of classic myth a surprising breath of fresh air within a supernatural stable of monsters already somewhat crowded with reinterpretation after reinterpretation of the classic monster pantheon, but it creates an entire narrative landscape in which to play. The interesting parallels present in the open sequence where the cottage-dwelling bohemian painter, Bruno Heitz and his female model, Sascha, find themselves at the crux of a sexual situation with which they must deal, echo not only the polarity of the sexes present within the mental facility of Dr. Namaroff (icily played by Peter Cushing), but also the artistic motif suggested by each victim of the gorgon’s curse looking like an alabaster treasure sculpted with harrowing and hellish accuracy. The connection might be between the arts and the terminus of life may be vague, but arguably there is, again, some relation here with regard to the gaze and the patriarchal ensnaring of beauty in perpetuum. The haunted and cursed estate/village/region element also gets a novel reinvention, an element eerily maximized by James Bernard’s score and the prowling camera drawing us ever deeper into the woods and the crumbling walls of the titular monster’s castle.

The uncannily deserted Castle Borski is a gothic monument to nightmares — certainly the most atmospherically menacing of all the sets Fisher’s filmed — which only heightens the dreamlike quality of the film…a film haunted as much by Barbara Shelley’s Carla Hoffmann as it is Prudence Hyman’s ophidian-haired Megaera. Shelley is tragically vulnerable in her naïveté to the murderous proceedings — and thus, tormented by them; her performance is spellbindingly human, adding complexity to an already grim affair. The shadowy, obfuscated reflections and glimpses of Prudence Hyman’s gorgon are effectively unearthly (the effects are, admittedly, best kept on the periphery), though one does wonder what impact Shelley would have had had she played both roles as originally intended. The casting of Hyman seems to be influenced by her former career as a ballerina — it was decided that Megaera should glide and float like an unearthly wraith — as well as the fact that, given the tight production schedule, the producers deemed it logical that the femme fatale in full regalia best be played by another actress (it was also believed that, with the inclusion of another actress, the creature’s true identity would be better kept from audiences). Barbara Shelley did, however, willingly subject herself through several make-up screen tests with Hammer alum Roy Ashton before the final creature design was decided upon. Given Shelley’s incredibly smoldering on-screen transformation from the repressed Victorian shrew, Helen Kent, into a red-hot, voluptuous vixen from beyond the grave in 1966’s DRACULA: PRINCE OF DARKNESS, it seems a shame that the producers denied her the opportunity to inhabit both roles. Hyman’s Megaera is otherworldly enough to sell the moments of horror, despite inexplicably being billed as “Chateline,” a character seemingly never mentioned within the narrative.

If, in celebration of Women in Horror, you fancy a “venture into the deepest, starkest realms of the supernatural,” then stare directly into THE GORGON…especially if you understand the allure of revisiting that “woman as monster” intonation in a stylishly-gothic, bizarre, and explicitly psychoanalytic package. Gaze into our eyes…and celebrate #womeninhorror all day, every day.