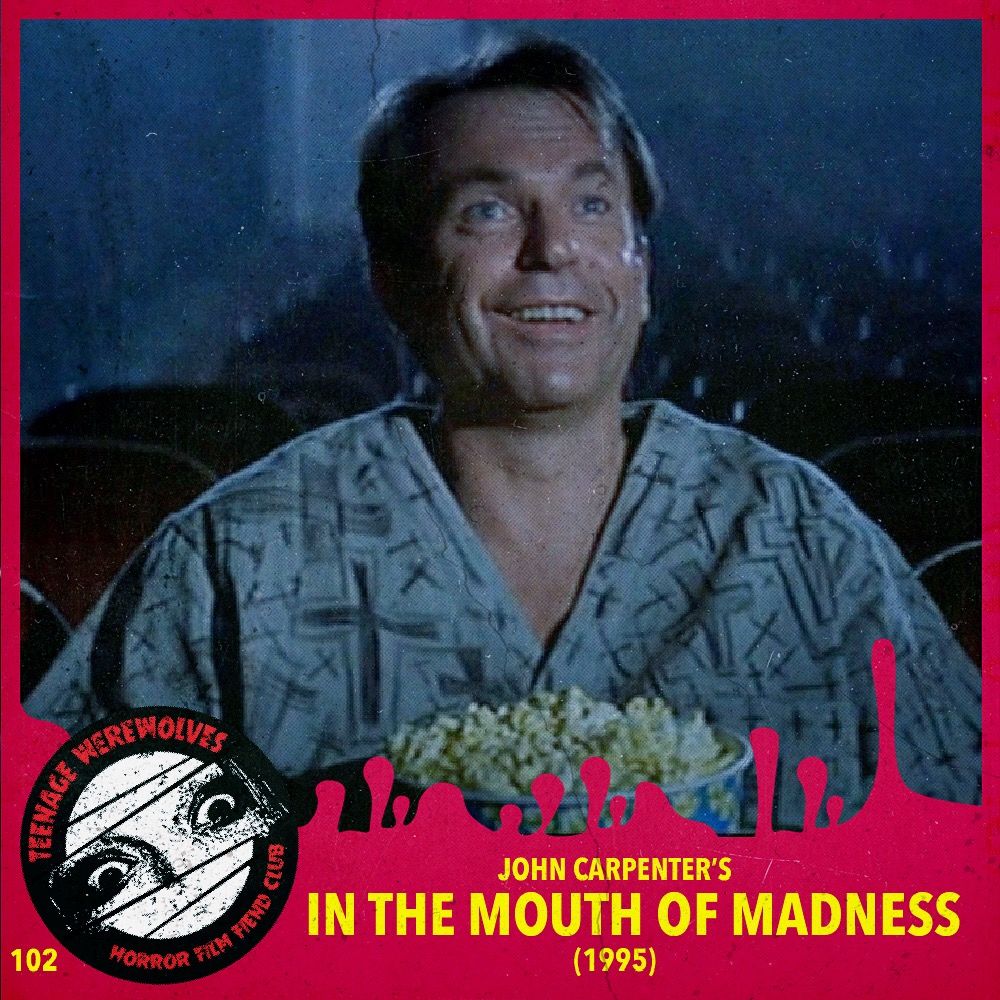 “Reality is just what we tell each other it is. Sane and insane could easily switch places if the insane were to become a majority. You would find yourself locked in a padded cell, wondering what happened to the world.”

An arcane circus of meta-cinema, metalinguistics, frame narrative, cyclical repetition, Lovecraftian homage, and serving as the closing chapter in Carpenter’s “apocalypse trilogy,” IN THE MOUTH OF MADNESS is a film that failed to connect with a majority of audiences (and thus, a financial disappointment), but its reputation has thankfully moved from misunderstood gem to beloved cult classic.

Self-reflexive in nature, and often a commentary on the pervasive power of popular literature and film upon our collective subconscious-gone-wrong — as well as a meditation on insanity — Carpenter’s film delivers in spades, with everything from Sam Neill’s charmingly misanthropic performance, to it’s bleak humor of the blackest variety. Released into American theatres on this day in 1995, Carpenter interestingly passed on the Micheal Deluca (FREDDY’S DEAD) screenplay initially, but, years later was able to steer the film in a direction that arguably fits perfectly within the director’s own canon: one that overtly explores those dread-laden and atmospheric, Lovecraftian nuances suggested within THE FOG, THE THING, and PRINCE OF DARKNESS before it. The ideas — clearly a bundle of well-handled homages to the work and aesthetic of celebrated pulp auteur, H. P. Lovecraft — are stunningly complex, especially in comparison to where the horror cycle was stuck at the time of the film’s release, and what Carpenter delivers is, essentially, a self-reflexive celebration of the genre itself that in many ways completely predates the SCREAM-inspired postmodernist trend (albeit one more anchored in literary threads than out-and-out tropes and trends). The world-building that Carpenter and Deluca present us with establish that unnervingly influential genre author Sutter Cane has not only disappeared without a trace, but his latest yet-to-be-published novel seems to have inordinate impact upon our waking world; as a cipher for Lovercraft, the hideous creations of Cane’s mind are the true architects of our reality, and they pull our strings from beyond the stars…or at least the printed page. Enter the myriad of tentacled horrors and moments of uneasy atmosphere, all ready for their close-up…or disorienting long-shot, which tends to be the case. IN THE MOUTH OF MADNESS is rife with sly approaches to it’s blending of reality and surreality, even going as far as to, as the film progresses, costume the two leads in essentially the same wardrobe, thereby blending their identities in the same way art is imitating life and vice-versa (an idea Carpenter very much enjoyed but claims the actors eventually took issue with). The performance from Sam Neill as John Trent is an excellent one, full of nuance and curmudgeonly smugness, and Julie Carmen’s Linda Styles plays a perfect counterpoint, suffusing the space between them with a willful determination to cut through Trent’s arrogant blindness. What results, then, is a dizzying cavalcade of reality-unraveling images and sequences which pummel the protagonists with fatalistic aplomb, pushing them to a bleakly bizarre precipice where our world is not necessarily our own — nor are our actions or consciousness (Styles despairingly intones, “He wrote me this way!”) — ending with a meta-cinematic denouement that makes the audience themselves very much a part of the arcane machinations projected onto the silver screen. It is conceptualizations such as this that may have left some viewers, critics included, cold…and confused. Certainly regarded as one of the “smarter” exercises in horror

Despite being yet another box-office failure for Carpenter (who seems perpetually ahead of his time) the critical reception was polarizingly mixed. Cinema connoisseurand armchair juggernauts Siskel and Ebert, as well as ReelThoughts‘ James Berardinelli appreciated the technical aspects of Carpenter’s film, but felt the film’s lofty and verbose ideas fall flat. In a fully positive review upon release, however, the Los Angeles Times gave IN THE MOUTH OF MADNESS an A, categorizing it as “a thinking person’s horror picture that dares to be as cerebral as it is visceral” and later included the film as “one of the best of 1995.” Other critics, at the time, noted that “Carpenter has the audacity to create a genuinely horrifying concept that dives beneath the surface and brings back a story that will stick with its audiences like a bloody adhesive.” Like most of Carpenter’s oeuvre, the film found its life on video and history has righted the wrongs of 1995.

Twenty-five years later, IN THE MOUTH OF MADNESS forever remains the cult Club favorite it has always been, when we first beheld its hypnotic spell at the local multiplex that chilly day in February of ’95, roaring and gibbering in delight like so many Old Ones in the dark…and not unlike, it turns out, old John Trent himself. Meet us in Hobb’s End for the end of the world as we know it, Fiends…you shouldn’t have any trouble finding us: we’ll be the ones on the park bench, in front of the Black Church…feverishly reading Sutter Cane.