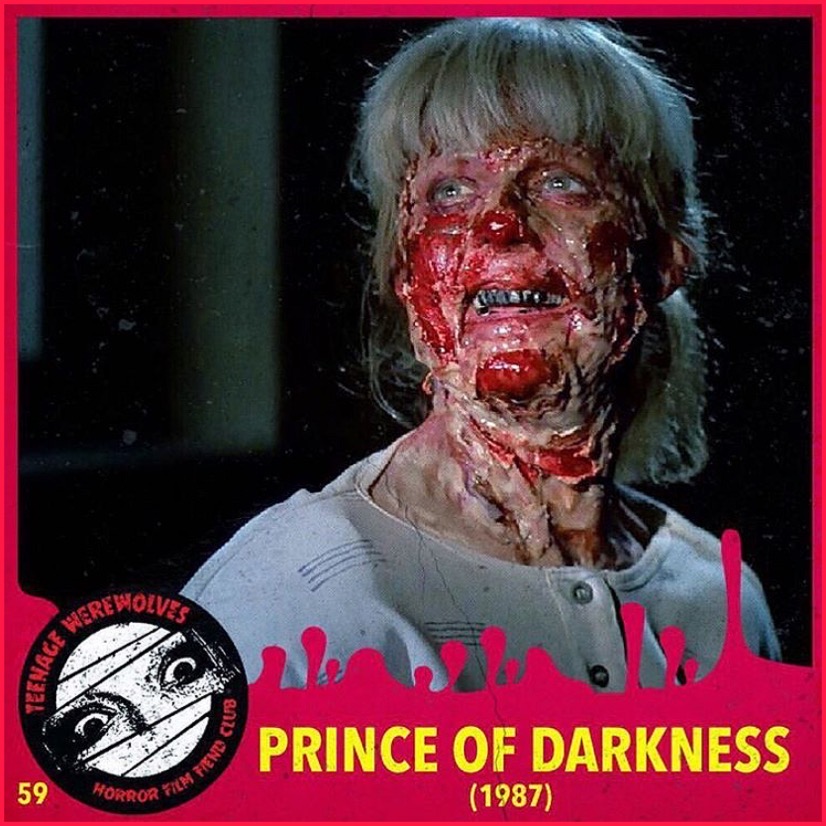 “Hello…Hello? I’ve got a message for you…and you’re not going to like it.”

Inspired by John Carpenter’s burgeoning interest in quantum mechanics and the challenges to classical reality contained therein, PRINCE OF DARKNESS is an existential terror of a film where a dizzying blend of impressive concepts take root — a place where the supernatural, armageddon, religion, and science all converge at a subatomic level.

Carpenter’s film of cosmic horror begins with an epically mesmerizing title sequence which lasts in excess of an impressively unthinkable 10 minutes and 30 seconds and, through a mysterious montage of disparate images, introduces the diametrically oppositional chasm that exists between the worlds of science and religion. Through the pulsing, doom-laden notes of the minimalist (and sonically unrelenting) score from Carpenter and frequent collaborator, Alan Howarth, this ideological chasm, however, seems to find some implicit confluence where the impending “end of days” seems to be effortlessly nestled neatly within our everyday existence. Despite the centuries old sect of sentinels established within the Church, there seem to be insidious forces at work; so much so that the beliefs of old feel so compelled to consult the foremost thinkers of the local university. All of this we grasp during the this sprawling opening, told visually and in the implicit language of cinema as Carpenter is wont to do, employing his “the film will tell you if you let it” USC film-school ethos.

Within this middle installment of his self-proclaimed “Apocalypse Trilogy,” Carpenter uses his cherished concept of the simple “siege film” but adds to the Hawksian conceit, lovingly-lifted from RIO BRAVO: a secret order of priests; an anti-god; a viscous and sentient, green fluid as old as time itself; mind control; possession; body horror; academic panic; urban fears of the lower class; sentient insects and strange scripture; something utterly perplexing in the night sky; Alice Cooper; a foreboding old church; Donald Pleasance and Victor Wong; a great “mirror” gag which uses the simplest of set-ups; the upheaving realization that pretty much everything you’ve ever believed about the universe and reality is an out-and-out falsehood; a cryptic message from the future; what critic J. Kenneth Muir has argued is also an allegory for the AIDS crisis; and one intensely potent mustache. All of this on an extremely modest budget from Alive Films. Alive offered Carpenter a unique opportunity: a 3 picture deal, each with a budget of 3 million dollars, and full artistic control. The result of this freeing, creative venture was PRINCE OF DARKNESS and THEY LIVE, two films that have — like many of Carpenter’s films — found their life on VHS (and other post-theatrical formats), and have gone on to attain understandable cult status.

Seemingly, critics and genre-fans alike have polarizing opinions of this film — many of which include the stance that Carpenter provides a potent set-up, but that, once his intriguing components are all placed upon the cinematic chessboard, the film loses its way, devolving into a melee of possessions and bumping-offs, one personality at a time. We, on the other hand, are of a different opinion: It is a film with fantastic ideas, and although not all of them may may come to complete fruition, it is drenched with unsettling atmospheres and the existential tensions it offers last in the mind of the viewer long after the end-credits have rolled. Wong and Pleasance are in top form here, swinging linguistic fists in defense of science and faith, respectively. Peter Jason doing that little whistling trumpet routine? Delightful. The roving band of vacant-eyed homeless acolytes, drawn to the church like a magnet’s coil? Insidious and unnerving. The effects, despite the limited budget, are often a clever balance of resources, sleight of hand, and a stomach-churning character make-up. Like THE THING before it, PRINCE advances some existentially unnerving truths; Victor Wong intones that, “We’re born, we age, we die. The reverse NEVER happens…None of this is true! Say goodbye to classical reality, because our logic collapses on the subatomic level…into ghosts and shadows” and, assuredly, we know he is correct. Carpenter’s placement of the audience at the crossroads of science and religion, while also forcing us to consider an impending future of veritable chaos is where the true power of the film resides. Carpenter’s approach to the “dream transmissions” sequences that repeat throughout the film and affect a great many of the characters are, in and of themselves, examples of Carpenter’s art — they interrupt the overall film with their static- broadcast aesthetic (achieved through cinematographer Gary B. Kibbe re-filming the sequences as they play back on a television monitor) — and then leave behind a wake of lingering dread in the form of the exact lack of lucidity and closure the future brings to each and every one of us daily. In short, the more scientific approach to the existence of an anti-God (not unlike an anti-particle) rather than an actual Satanic presence lording over our sins — at least as Carpenter would have us understand it — presents a compellingly quotidian examination of cosmic horror, and one anchored in the universal forces that are truly at work within our world. This alone makes PRINCE OF DARKNESS a unique film, and certainly a unique entry in what the genre had to offer in the 1980s.

Some of the science and challenges to the natural order of things may confuse some (perhaps even turn them off) but PRINCE OF DARKNESS demands your attention again, and we strongly recommend the 2019 deluxe, 4K release from StudioCanal. We aren’t exactly sure who keeps all those candles in the basement lit, but light one for this 80’s classic. If not, we’ll squirt green goo in your face and force you to do our hellish bidding. Just remember: unless you’re a card carrying Fiend…”YOU WILL NOT BE SAVED!”