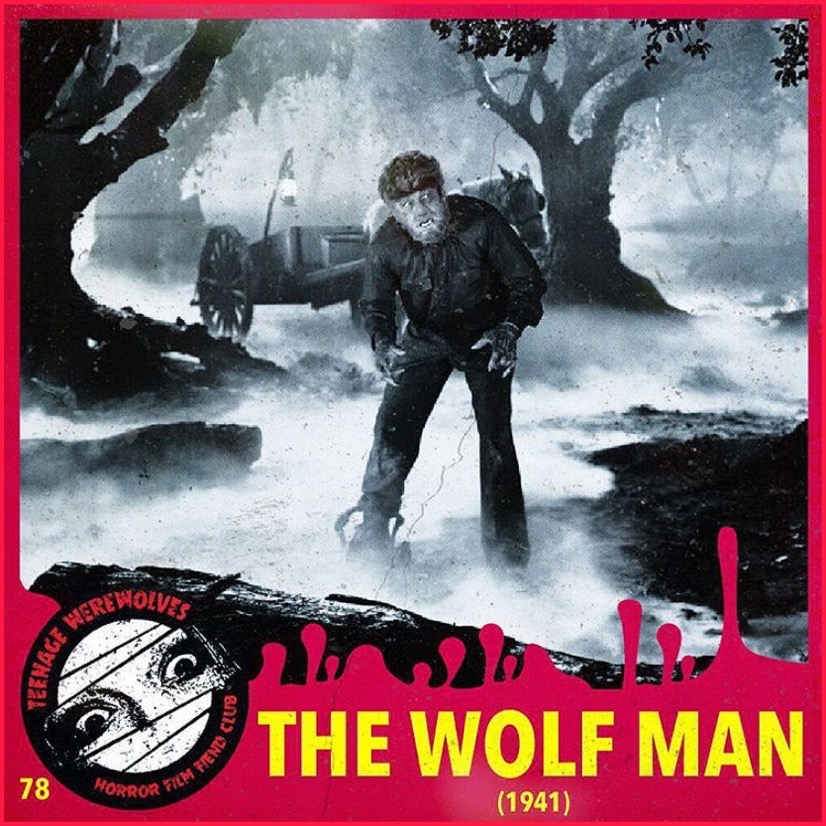 “It is said there is no sin in killing a beast, only in killing a man. But where does one begin and the other end?”

On this day in 1941, Siodmak and Waggner deliver one of the most potent Universal monster films via potent metaphor. Culled from his experiences as a German-born Jew fleeing the occupation, and rife with the classic Greek structure and Aristotelian arc, THE WOLF MAN stands as a darkly powerful, atmospheric fairy tale.

From the storybook opening intended usher the audience not only to an earlier age of familiarity and far-off kingdoms, but to establish the legend and psycho-scientific basis for the curse and condition plaguing the Talbot family. Regardless of the falsehoods afoot, the threads of macabre make-believe are hard at work, and what results is a fantastical work regarded by some to be the strongest of all the Universal monster films. Predominately recognized as the progenitor for all the lycanthropic films to come, the influence of Siodmak’s script upon the cultural zeitgeist is unquestionable. Though he initially disagreed with the the casting of Lon Chaney Jr. as the prodigal son of an English lord, even Siodmak cannot deny that the performance Chaney delivers is nothing short of tragic and drenched with pathos. Chaney’s Larry Talbot is victim of fate, pure and simple, powerless to control the unleashed beast within—not unlike Siodmak’s own cursed existence as a Jew under the encroaching Nazi regime…a regime that relentlessly used the image of the werewolf to great effect in its campaign of terror and destruction. And that symbolic star portentously marking the Wolf Man and his victim? Its inherent duality and meaning is not lost upon the viewer with an eye for theory and critique. The hirsute plight of Larry Talbot, though seemingly anchored only in late-night schlock, is academically rich as well — he is almost as classically Greek as they come, with his trajectory neatly fitting Aristotle’s famous proposal of the classic character arc. THE WOLF MAN not only contains the classic catastrophe and the desis (the tying of the knot), but the peripeteia (the reversal of fortune), the anagnorisis (the recognition). Furthermore, according to Aristotle in his touchstone text, Poetics, our character of focus actually exists of secondary import — he or she is present to serve the inner-workings of truth within the plot, and it through the tragic reversal of fortune that “pity is aroused by unmerited misfortune, fear by the misfortune of a man like ourselves.” This, of course, encapsulates exactly what we see unfold for Larry — something Siodmak was finely attuned to and has gone on record about at length. His further use of Aristotle’s theories within his drafts of THE WOLF MAN proposes that “the crucial role of the hamartia in tragedy comes not from its moral status but from the inevitability of its consequences,” and like Sophocles’ Oedipus, Larry’s destruction is written in the stars…or as Siodmak might argue, is written in his genealogy, faith, and geography: His “symbolic” immersion in the ethnoreligious universe in which he inhabits is so strong he is unceremoniously and brutally laid at the feet of the “wolf people” of Nazi Germany. To further develop the point, Siodmak’s own autobiography is enitled Unter Wolfsmenschen, or “Under Wolf People.”

Despite the heavy amounts of academia and harrowing context that can be read into Waggner’s THE WOLF MAN, what most audiences will grasp is a first-class monster picture, and in this they are not unmistaken. THE WOLF MAN endures as one of the top-tier monsters in the Universal pantheon, and this, more than likely, is because he is us; the duality inherent with Larry Talbot is as old as time itself and is the metaphorical construct of all that is dualistic and at odds with itself with our human frame. But rather than get lost in the truths of existential terrors regarding humanity as a sentient species emotionally, spiritually, and mentally divided, what Waggner delivers is a fantasy akin to a fairy-tale, where we can escape, for a few fleeting moments, the tragedy of our own existence via the escapism of the silver screen. Complete with gypsy caravans, curses, misty moors, a love triangle, familial conflicts, men who become monsters, and individuals crushed by the immense weights of expectation and identity (consider Larry’s reluctant inheritance of his father’s estate and titles; Gwen’s engagement and nagging sense of duty versus love; and the literal shifts in identity that both Bela and Larry are forced to submit to), THE WOLF MAN transports us to a land of fantasy so clearly anchored in our own reality…and yet one that, despite the temporal and spatial settings, curiously avoids any mention of the second World War which, logically, would be raging not too far from the doorstep of Talbot Manor. It is a land of both fortune-telling gypsies and fancy roadsters, itself a comment on artifice and diametric opposites.

Psychologically speaking, this film has a grand many truths about the inherent duality of the human mind–an archetypal story of humanity’s struggle as old as time itself. Rains and Chaney are in top form here, and despite their acrimonious relationship off-screen, Chaney and co-star Eveyln Ankers have palpable chemistry (it carries the realistic strains of the aforementioned triangle) as well. Maria Ouspenskaya in the role of Maleva, the gypsy matriarch is, simply put, incredible; she elevates layers of the film’s proposed reality to even greater heights, seeming as though she is a genuine hold-over from some other time and place. Nothing tops the performance of those misty graveyards and haunted bowers, however, except perhaps for Pierce’s iconic make-up and the lapse-dissolve transformations. There’s something so bizarre — but still so commanding — about focusing on Larry’s feet as the transformative visual device; it isn’t until the later installments that we see Chaney’s harrowing visage undergo the layer-upon-layer of yak hair dissolves. One of the more effective sequences, however, is one without any use of ” werewolfery” at all: The bout of psychotic confusion — complete with rattled nerves, seeming bouts of vertigo, and hallucinatory phantasms of everything wolfish, feral, and supernatural — at the local gypsy carnival. We see the explicit anguish in Larry’s face as he is made the subject of not only public ridicule, but the eventual acceptance that he, in fact, may be the violent predator responsible for Jenny Williams’ (Fay Helm) death. And furthermore, we’d be remiss if we didn’t mention how much we’d like to see the fully-realized sequence of Larry wrestling the gypsy bear in the carnival thoroughfare, a segment that exists in on-set photography but was subsequently cut (and remains unfilmed) due to the fact that it was decided it complicated the audience’s ability to retain sympathy for Larry and his plight — making his behavior overtly masculine and brutally oppressive seemingly detracted from his tragically heroic status.

Though fairly-effective, WEREWOLF OF LONDON would be released by Universal six years earlier (and is far more anchored in the mad-scientist narrative than the supernatural), it is Waggner’s THE WOLF MAN which, understandably, helped pave the way for all werewolf films to come, heavily influencing THE HOWLING and AN AMERICAN WEREWOLF IN LONDON especially, with Siodmak practically inventing what we accept as the werewolf mythos. The apocryphal poem, “Even a man who is pure in heart, / And says his prayers by night / May become a Wolf when the Wolfsbane blooms / And the autumn Moon is bright,” is so concreted within our creature-consciousness and is, at first glance, assuredly something first whispered around the campfires of Euro-gypsies…and yet is it a product of Siomak’s prolific mind. Thankfully, it is forever cursed to be a part of our collective consciousness, and no amount of silver can put it in the ground. File this one under “Essential Viewing” and be sure it’s highlighted on your syllabus, Fiends…but, maybe consider cancelling that palm-reading appointment tonight—watch Waggner and Siodmak’s THE WOLF MAN instead.